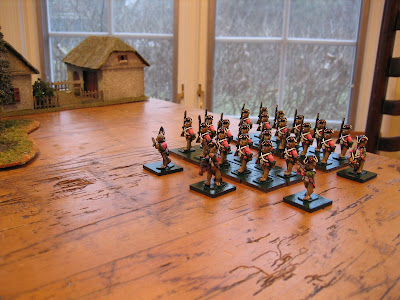 The Herzog Georg Ludwig of Hesse Seewald and his family wish you and yours a Merry Christmas and a Happy 2009.


For 2009, we may see the beginnings of an official Hesse Seewald army that would be apart from the traditional Prussians that I use as stand-ins. I'm not going to promise that I will get it done, but after reading Charles S. Grant's The Wargame Companion , the idea of at least a brigade of imaginery forces holds some appeal with me. 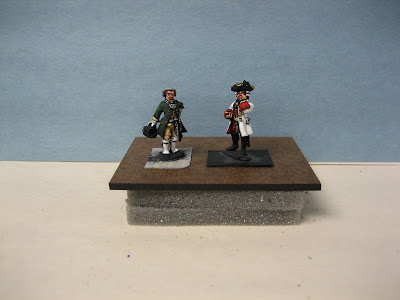 Baron von Doppelganger (left) is a Foundry freikorps officer wearing the uniform of the Royal Foresters Regiment in the Hesse Seewald Army. The Austrian chap on the right is a Foundry Russian officer painted in Austrian mufti.

I am contemplating four or five battalions of infantry, a company of foot artillery, and eight squadrons of cavalry (Garde du Corps, line cuirassiers, dragoons and hussars).

I will be working on some sample uniforms over the next several weeks, but I think that the uniforms will be Prussian in style, only with green coats, straw small-clothes and facing colors or red, straw, pink and white (sort of like French Napoleonic dragoons). The artillery will wear green coats/straw clothes/red facing similar to the Saxon artillery. The Garde du Corp will wear red coats and blue facing. the line cuirassiers will have buff coats and the dragoons will be either red or blue. The hussars will be the actual Luckner's Hussars.
Posted by Der Alte Fritz at 1:32 PM