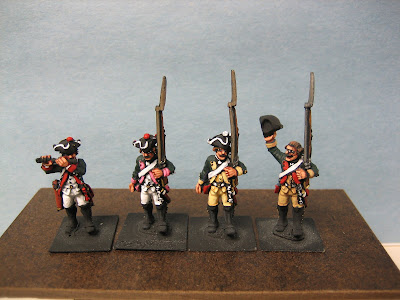 Uniforms of regiments (L-R) Holstein, Charlottenburg, Glasenap, and The Royal Foresters. (click all pix to enlarge the views)

I spent some time over the weekend experimenting with possible uniform combinations for the Hesse Seewald army. I had a couple of extra Foundry SYW Prussian figures laying around, already primed, so they were drafted by the Elector's tailors to model some of the new uniforms. I have not decided which figures to use for the Hesse Seewald army, but I am leaning towards the Minden Miniatures range, since this is rather comprehensive and will eventually provide all three of the major combat arms: infantry, cavalry and artillery. Crusader is another possibility, although these are chunkier than I generally prefer, their height fits in well with my existing figures. I plan to prime a few Minden samples this week and see how they look in green uniforms. My guess is that they will look fine and dandy.

Hesse Seewald regiments will have 48 rank and file and maybe 3 or 4 extra officers positioned behind the battalion as file closers. Hmm, this sounds like the Charles Grant model, doesn't it? Recall that Grant's The Wargame Companion is the inspiration for this project. Of course, this is subject to change, if for example, they get mowed down by the larger 60 man French battalions of Monsieur Chevert. That may cause me to strengthen the battalion to 60, but for now, that is my plan. I may also attach a regiment 3 or 4 pounder to EACH battalion to act as a bit of an equalizer.

A note about the pictures here: they were photographed on my Macro setting for closeup pictures, so when you click on the picture to enlarge the view, the figures will be somewhat distorted as you are enlarging them to three or four times their actual size. Remember that they are really only 28mm high. They actually look pretty good in the flesh. 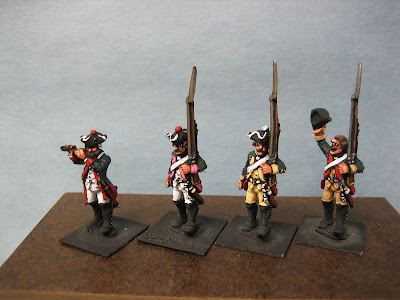 Another view of Holstein (red facings), Charlottenburg (pink), Glasenap (straw) and the Royal Foresters (red facings with buff small clothes). All figures are from the Foundry SYW range of Prussians, painted by Der Alte Fritz. 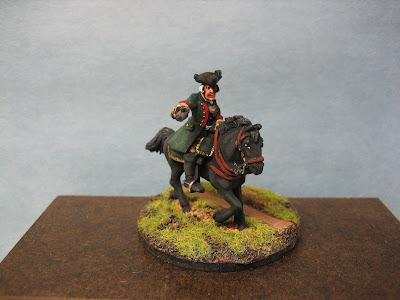 Colonel von Kleist, himself, from the Foundry range of Prussian freikorps officers. 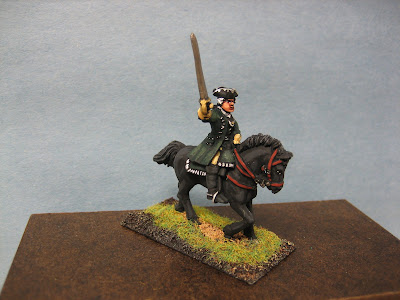 Von Kleist freikorps officer's uniform provides a hint of what the official Hesse Seewald officers' uniforms will look like.

The two officers shown above will provide a glimpse at what the Hesse Seewald officers will look like. They sport green coats, wear regimental facings and small clothes (they are inhabers of one of the five regiments in the H-S army), and wear silver waist sashes.
Posted by Der Alte Fritz at 11:29 PM