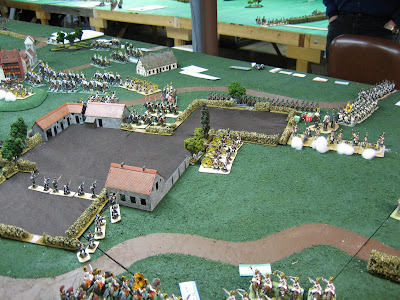 At the end of Day One, the Austrian infantry was converging on the Grosserdorf farm, mildly contested by the French, who have advanced a few skirmishers into the farm enclosure. 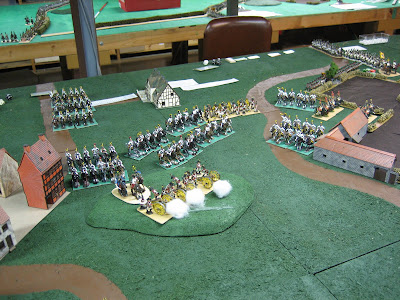 Austrian horse artillery, supported by cuirassiers, hold the entry to the town of Altenberg (it had no previous name, but I've just given it one to keep track of things). 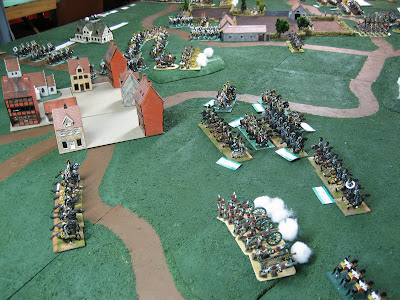 The Russian cavalry and a battery of horse artillery control the area to the right of Altenberg. 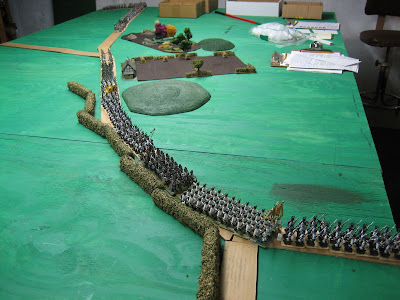 A long column of Austrian infantry march towards the town of Altenberg, in the center of the battlefield towards the end of the first day.

Day Two Battle in the Center Around Altenberg 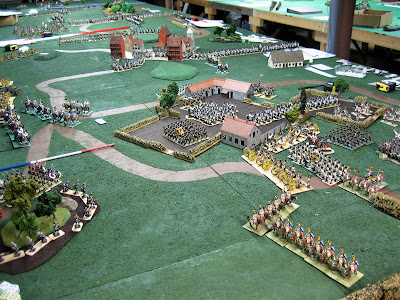 What a difference a day makes: the Austrians have firm control over the Grosserdorf farm enclosure, while the French have retreated to their back table. A small group of French skirmishers hold out in the woods on the left, but not for long. 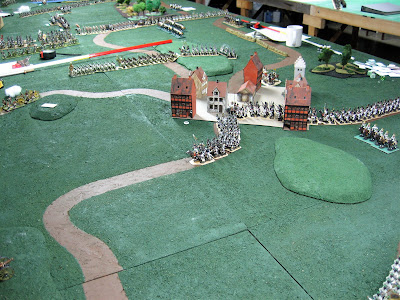 As the Austrian and Russian cavalry push the French off of the center table and onto their own back table, the second Austrian infantry corps makes a leisurely march through Altenberg to support the attack in the center. 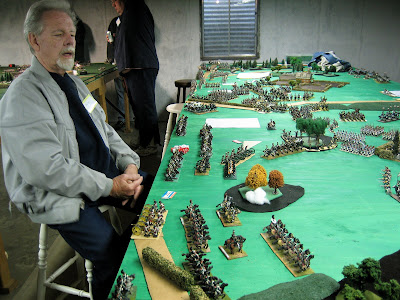 Uncle Duke, commanding the Austrians and Russians in the center, has pushed the French back onto the back table. This was one of the finest examples of wargame generalship that I have ever seen in a game.

Day Two of the battle of Altenberg commenced with the French deciding that they would need to fall back and form up a defensive position on the back table in their own center and right wings of the army. As noted in yesterday's report, Davout was also holding the defense on the left. So the offensive initiative was ceded to the Allies so that the French could build up their infantry strength.

Duke Siefried commanded the Austrians and Russians in the center and he put on a wargaming clinic on how to use combined cavalry and horse artillery to defeat one's opponent. It was one of the best displays of table top generalship that I had ever seen. It seems like the French were always on the run and Duke never gave them breathing room to recover. There always seemed to be a squadron of cavalry to the front and flank of any French cavalry attack, while the horse artillery was used with deadly precision. 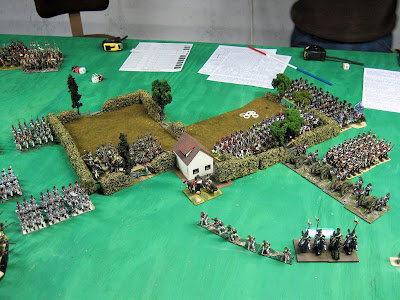 A second French corps arrives in the center (mixed group of Bavarians and French) and occuppy one of the farms in a defensive position. The battery on the right is about to get over run by the Russian cavalry as the French cavalry has abondoned the centre, leaving the French infantry to fend for themselves in square. 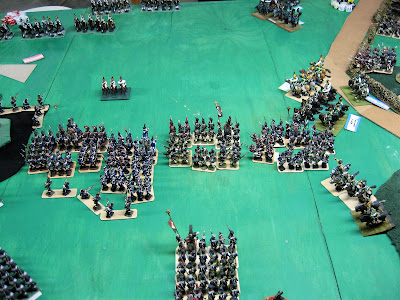 The French First Corps in the center holds to its squares, while the cavalry seeks refuge behind them in hopes of reforming. 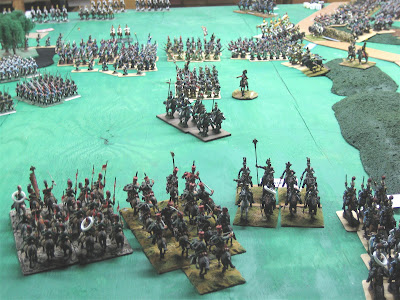 French cavalry in the center try to reform behind the protective squares of the First Corps.


So at the end of Day Two, the French now have two infantry corps pinned down in the center by hoards of Austrian and Russian cavalry. The French Fourth Corps commander was last seen sending most of his heavy cavalry over to the center to assist his beleagured comrades. I should point out that it was the French plan to consolidate on the back table, but we were a bit surprised by how aggressive the enemy cavalry were. The Austrians are now well screened so that they can bring up their infantry and hold the ground gained by their cavalry. These are not the usual Austrians, my dear Chanticlare.

I will post pictures of the French and British battle on the French right within the next couple of days.
Posted by Der Alte Fritz at 4:47 PM