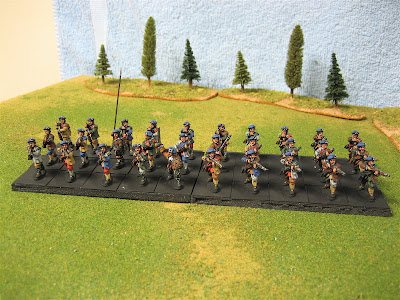 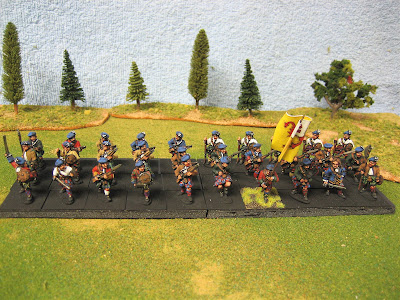 As you can see from the two pictures above, I've been busy painting Jacobites for our game next Saturday, May 9th at DeKalb. Ostensibly, we will continue the seige of Carmudgeon Castle that we started last summer (gee, has it really been that long?). On the other hand, with the two new units that I painted in April, plus some French reinforcements that General Chevert is painting, we may opt to fight a larger set piece Jacobite battle. I enjoy painting the Front Rank Jacobites, and thought that I might be able to paint a third 30-figure clan regiment, but then I sort of burned out on kilts and plaids and turned my painting attention in another direction.

My April Olley Painting Points totalled 92 points, down a bit from the 115 or so that I notched in March. The April talley included 60 Front Rank Jacobites and 16 Elite Napoleonic French Dragoons (cavalry count as 2 points since they include a horse and a rider). The Napoleonics were a needed diversion from plaids and no doubt our In The Grand Manner game last month had something to do with that choice.

1806 Project Revisited
As mentioned above, the big Napoleonic game we played stirred up an urge to get back to the painting of Napoleonics so that I can move my 1806 Project along the way. As of this evening, I have finished 27 French Dragoons and probably would have finished a full ITGM regiment of 32 figures, had I not run out of suitable horses. Reinforcements from Elite will be on their way within another week or two, at which time I will increase the dragoons to at least 36 figures, and eventually a final total of 48 figures.

In the meantime, I have a 60-figure battalion of Prussians musketeers in the march attack pose. This is a relatively new figure that Peter Morbey added to his 1806 range, about a year ago. I primed the battalion over the weekend - we finally had nice Spring weather here in Hesse Seewald so I was going through cans of Armoury Black Spray Primer like there was no tomorrow. I also managed to get a 72-figure battalion of 1805/06 French infantry primed and ready to go. Finally, Elite also introduced a couple of Prussian musketeers in the kneeling and standing firing position, so I plan to paint a battalion in a firing line pose. All of this should keep me busy through the rest of May and June.

I have decided that now is the time to make a big push on the 1806 Project so that I finally have a suitable mass of figures to begin playtesting a BAR variant for Napoleonics. On the French side, we have 5 battalions of infantry (2 provided by Bill Protz), 1 regiment of dragoons and an 8-pounder artillery battery (3 x 8pdrs and 1 x Howitzer). There is also a partially painted 36 figure regiment of chasseurs a cheval.

So feel like I am almost at critical mass and the addition of a couple more units of this and that should give me a playable quantity of troops for play testing the rules. One day, in the future, I can foresee a large Napoleonic game with a dozen infantry units per side, a couple of artillery batteries, and four to six cavalry regiments per side. It will truly be a grand sight to behold.
l
Posted by Der Alte Fritz at 7:20 PM