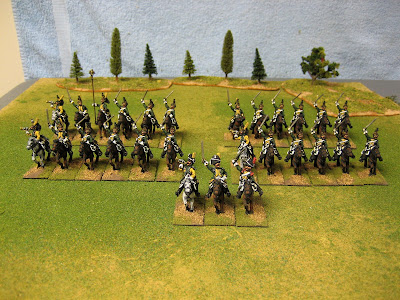 The picture above depicts the 27 French dragoons that I have painted so far for my 1806 project. I could have painted more, but I ran out of horses and so I have to wait for the next shipment of reinforcements from the UK. I like to glue the rider onto the horse and the base before I prime the figures. I am not really keen on painting the rider and horse separately and then gluing after the painting is done. You get a better "metal to metal" bond with the glue when you glue the pieces together unprimed.

In the near term, I will top up this unit to 32 figures so that I have enough to use in our In The Grand Manner wargames. Eventually, though, there will be four squadrons of 12 figures for a total of 48 figures under the "BAR Napoleonique" rules system. If you look closer, you will see that each figure is sitting on its own 1" by 2" metal base. Later, I will make wooden movement trays, covered in magnetic sheeting, large enough to hold 3 or 4 figures in a single rank. A squadron would then be three stands of four figures, lined up in three ranks.
I seem to be in a Napoleonic painting spurt once again, probably inspired by the ITGM game that we played in April. Part II of that battle will be played on May 30th. I figured that as long as I am so inspired, that I might as well take advantage of the situation and make a significant addition to my 1806 project in May and June. Last weekend I primed two 60-figure battalions of Prussian musketeers (one in the march attack pose, and one in a firing line pose-standing and kneeling firing) and began work on the first 30 of the march attack battalion. These will have the rose colored facings of IR23 von Winning while the firing line will have the straw colored facings of IR5 von Kliest. Completion of these two battalions will then give me 6 Prussian battalions, which should be enough to conduct my first play test of the rules.

In June, I hope to complete a battalion of French line musketeers (72 figures), which would bring the French contingent up to three battalions (plus two more battalions that Bill has already painted). Of course, I could totally burn out on painting Napoleonics by then, but I am willing to bet that the continuation of the ITGM game in May will keep me going.

I will post the pictures of our Jacobite game this past weekend within the next day or two. I took a fair number of pictures, but the strong natural light in the room made most of the pix too bright and so only a few of them are worth saving and publishing. I will keep you guessing as to which side one. An item of note, both The Blade and von Bergmann were slain in battle. I was all prepared to make little balsa wood casks and mail the figures back to their owners, but then we hit on the idea of rolling saving throws for the characters. A roll of a 4, 5 or 6 would save their lives. Thus, both The Blade and von Bergmann survived and have proven to lead rather charmed lives. The Blade has a 4 month recovery time and von Bergmann will be out of action for 6 months (both amounts of recovery determined by the roll of a D6).
Posted by Der Alte Fritz at 7:10 PM