In The Grand Manner - Day 2 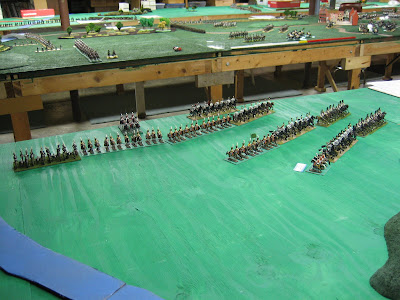 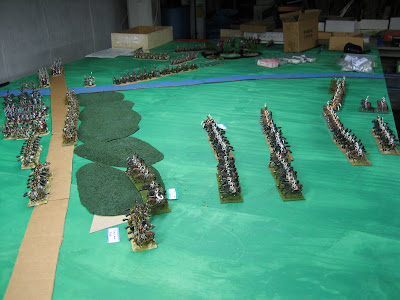 Today we reconvened the In The Grand Manner Napoleonic wargame that started on April 19th. As you may recall, the battle began with cavalry brigades entering the tables from a variety of directions. The French dice rolls resulted in two of three cavalry brigades entering on the same road as well as two of the three infantry corps. So we were sort of bottled up in a bridgehead that was reminiscent of Aspern-Esseling. Some relief was provided by Davout's large corps of 14 battalions and two field batteries entering the table on the far left flank of the French. We concluded Day One with Davout holding onto the high ground for dear life, hoping to buy enough time to get his corps across the river and set up for an eventual attack. Today's post will focus mainly on the fight that occurred in Davout's sector during today's battle.

The Russians began the day with a very strong cavalry corps of 21 squadrons, consisting of 7 squadrons of elite cuirassiers, 6 squadrons of hussars, 8 squadrons of those dreaded pig stickers (aka Lancers) and a horse artillery battery of three light guns.

Davout had only 13 squadrons of horse, consisting of 7 squadrons of dragoons, 4 chasseur squadrons and 2 squadrons of lancers. These were all deployed across the river on the Russian side of the table. Their mission was to provide a screen that would enable Davout to cross his corps of 14 infantry battalions, one 12-pd battery (4 guns) and one 6-pd battery (4 guns). Davout deployed all of his artillery on the French side of the river (which was not fordable, so it could only be crossed at one of the two bridges spanning the water) so that it could enfilade any Russian attack on the long ridge that was perpendicular to the Russian cavalry, thereby screening the advancing French infantry. Three infantry battalions had already crossed the river and they were deployed in square, screened further by the ridge and by all of the French cavalry. The Russians could not charge anything on the reverse slope of the ridge because it blocked line of sight. You can not charge what you can not see. 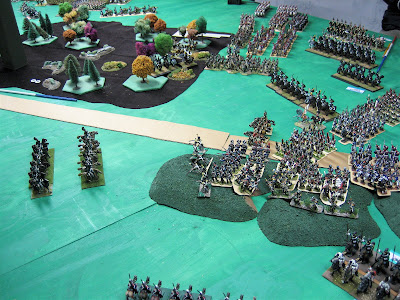 Davout commenced Day Two by opening an artillery salvo against the Russian cavalry, with orders to pay particular attention to the cuirassiers, lancers and then hussars, in that order. Several turns of long range artillery reduced the Russian hussar screen and forced two cuirassier squadrons to return to their own lines. This narrowed the Russain advantage from 21 squadrons to 17 squadrons, versus the 13 French squadrons. At this point, Davout ordered the heavy dragoons on his far right to engage the Russian dragoons (another 4 squadrons of which joined in on the assault) and cuirassiers. The French gained a slight advantage in the ensuing melees, forcing a couple more squadrons of cuirassier and hussars off the field.

Now Davout ordered an all out cavalry charge at the remaining Russian cavalry -- and then a wonderful thing happened. A single squadron of French lancers won a melee against a larger and heavier Russian cuirassier squadron, forcing to to flee, but more importantly, pinning the two cuirassier squadrons that were stacked up behind it. The lancers lost nary a trooper. They also rolled an immediate pursuit, which is a good thing. To the lancers left, the French sent in two squadrons of chasseurs against a similar number of Russian lancers. They lost two troopers, but Davout picked the right moment to start rolling hot dice. The French chasseurs downed 6 Russians! The Russian lancers turned and fled, also pinning more Russian cavalry behind them. As for the chasseurs, Lady Luck speaks French today, for the chasseurs rallied on the spot and were thus in a position to ride down the rest of the Russian cavalry, which was either pinned or fleeing. Pictures of the end result can be seen below. 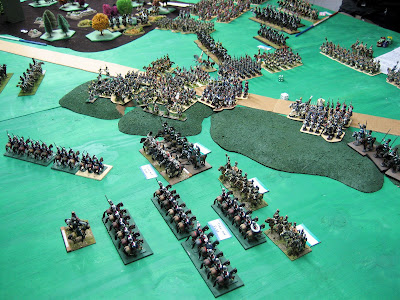 At the end of Day Two, we see the victorious French chasseurs turning back the Russian lancers in the front line. Their retreat will pin the three Russian squadrons behind them To the right of the chasseurs, you can see the French lancers driving off a squadron of Russian cuirassiers. The cuirassiers will pin the two squadrons of lancers behind them when they rout. The French lancers will have an uncontrolled pursuit into a mass of pinned Russian cavalry. French infantry squares can be see atop the key defensive ridge. 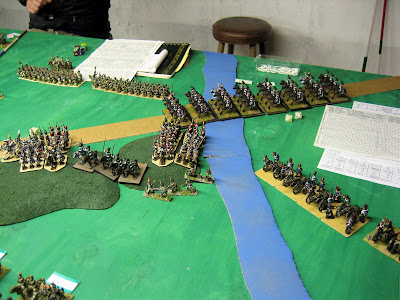 The Guard cavalry division plus a regiment of line cuirassiers arrived on the far side of the river on Turn 18. Here you can see the cuirassiers crossing the river to help out the French cavalry in the main fight. They did not arrive in time to cross swords with the Russians, but they are well posisitioned to follow up and send the Russian host on the run.

While all of these glorious events were happening on the main cavalry field, the Old Guard infantry was arriving behind the large wooded area to Davout's right. The Guard cavalry division was also arriving on the French side (the side where the French artillery is deployed) of the river. This caused a division of Russian infantry, attempting to march up the table edge across the river, to pause and fall back. Davout sent the Guard Lancers and Guard Horse Artillery after the Russians, and maintained four or five infantry battalions on the short side of the river to protect the French grand battery. The line cuirassiers and Guard Horse Grenadiers and Chasseurs began to cross the river.

So the day ended with Davout and the Guard poised to push the Russians back onto the middle table. Now that most of the Russian cavalry was fleeing or falling back into walk-about mode for two turns, it would be safe for the infantry to get out of their squares and advance forward. So things look very promising on the French left flank as we head into Day Three, which will be played on June 24, 2009.

As for events in the center (Austrians versus French) and right flank (British versus French), I will post more pictures over the next several days and do my best to tell that story. To put it briefly, the Austrian cavalry commander in the center, the Duke of Siefried, aggressively pushed the French off of the middle table and well back onto the rear table. The Duke put on an impressive display of wargaming skills and had the French on the run in the center. On the far right, the French fell back onto the back table to deploy into a battle line and play defense (which was our plan), enticing the British to advance.

I did not spend much time monitoring the events in the other sectors, for I was too busy tending to affairs on the left. How's that for fog of war? You don't need special rules for FOW when you are playing on 24 foot long tables. You are too busy in your own sector to even notice what is going on elsewhere on the table.
Posted by Der Alte Fritz at 11:54 PM