The Hundred Days of the 1806 Project 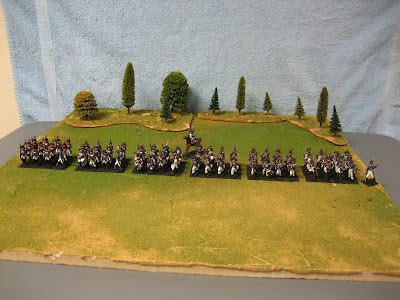 French battalion formed in a line of 6 companies, per the 1808 regulations. For the 1805-07 campaigns, the French would have 9 companies instead of 6.

On May 1, 2009 , I decided that it was time to concentrate all of my efforts into finally getting the 1806 Napoleonic project off the ground. Earlier in the year, I had done a similar focused painting effort to get my SYW Austrians, while the month of April was devoted to increasing my Jacobite Rebellion forces. I decided that this method of focusing on one army for a month or more seems to work for me. So with that in mind, I turned my attention to the revival of the French and Prussian 1806 army building. 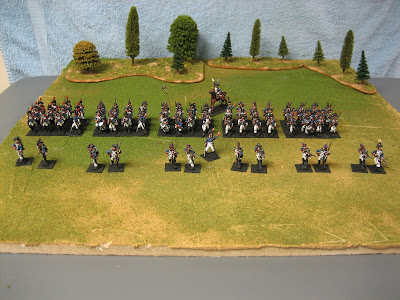 The regimental colonel has deployed his company of voltigeurs out in front of the battalion. Now a player will actually be able to deploy a "cloud of skirmishers" that really means business.

My plan is to spend the next 100 days painting nothing but figures for the 1806 Project, effective May 1st and continuing on through August 8th. Hopefully this will result in the build up of a critical mass of infantry and cavalry for both sides so that we can start play testing the rules and organizing games. Bill Protz, Randy Frye and I are concurrently developing a set of rules, based on the BAR mechanics used for the SYW, albeit with plenty of Napoleonic twists. I think that the effort will result in a fun set of rules that are easy to learn, yet have plenty of nuances and set forth choices for the player.

I began the 100 Days Project by starting on the French 20e Regiment de Dragoons, and as of this evening, I have 36 dragoons and will have the regiment completed at 48 figures by the end of May, a week hence. I also have a battalion of 60 Prussian musketeers on the painting table (32 done so far) and I will work on the Prussian infantry once June rolls around. 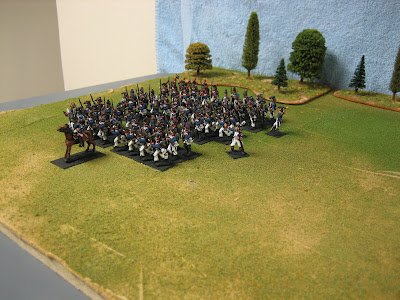 The battalion changes into a column of divisions, the so-called Attack Column that we all know and love. Doesn't that column look a little more imposing at a 1:10 figure to man ratio?


The plan is to paint two more Prussian infantry units, a 12-pounder battery of four guns and crew, and maybe a couple of squadrons of dragoons by August 8th. These additions will augment the current inventory of four Prussian battalions and two 6-pounders that I had completed last year. So that will give me a total of 6 btns and six artillery pieces. I have 36 converged cuirassiers and plan to use my SYW Black Hussars in my 1806 Prussian army. I can also use my SYW dragoons as stand ins until their actual 1806 counterparts are completed. The Prussians can be augmented by two battalions of 1805-07 Russians that I have already painted plus a Russian horse battery.

As for the French, they need more up front attention. I have two 72-figure infantry battalions, one legere battalion and these will be joined by Bill's two French line battalions. I have also painted an 8-pounder battery of four guns. The cavalry will consist of 40 cuirassiers, 48 dragoons and hopefully 48 chasseurs a cheval at the end of the 100 Days.

I am still trying to decide how to base my French. The 1791 regulations call for 8 companies plus one company of voltigeurs (beginning in 1804 with the addition of voltigeurs. Or I might sort of fudge it and use the 1808 organization of six companies, which is easier to work with when it comes to basing the figures.
Our first scheduled game is set for July 18th, so I should have plenty of time to paint some new units for both sides. We will undoubtedly have some informal play testing sessions in the interim so that we can work on our ideas for cavalry charges, square formations and changes, etc. and skirmisher rules. I am highly encouraged by some of the ideas that Bill has come up with so far. So stay tuned as the 100 Days rolls along. The French dragoons are nearly done and I am looking forward to adding more Prussians soon.
Posted by Der Alte Fritz at 12:32 AM