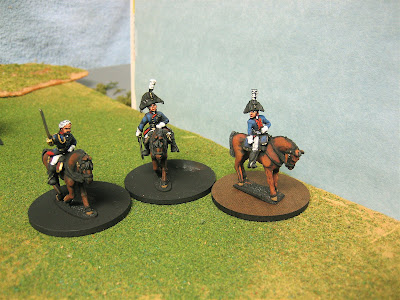 Foundry's version of Blucher (left) and Hohenlohe (center) compared to an Elite Miniatures general (right). Please click on all pictures to enlarge the view.

The Foundry has begun releasing the first of its new 1806 Prussian Napoleonic range and so when I saw that they had some mounted personality figures, I was eager to order some and see how they looked first hand and up close. As you can see from the picture above, the two ranges appear to be fairly compatible in terms of overall size, heft and height.

There are two personality packs so far: one contains Prince Hohenlohe, the loser at Jena and General von Ruchel (in an overcoat) and von Yorke (also in an overcoat, modelled after the Knotel drawing of Yorke leading his light infantry). The Blucher pack contains the generals and two mounted aides. All of the personalities are nicely sculpted, and von Blucher actually looks like the person that he is modeled after. Since Elite Miniatures only has a couple of mounted officers, the new Foundry generals are a welcome addition to my 1806 army. 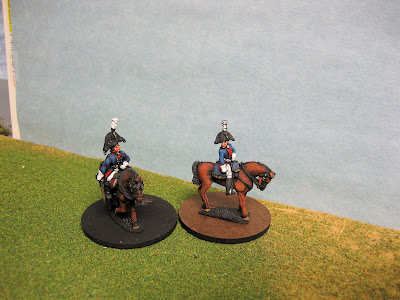 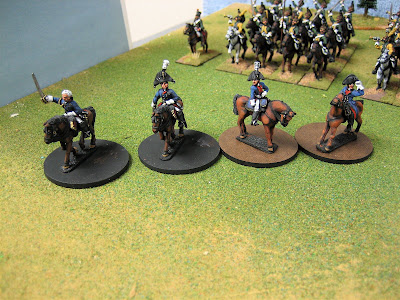 Blucher, Hohenlohe and two Elite Miniatures generals (on the right). French dragoons from Elite are shown in the background, but pay no heed to them for now. 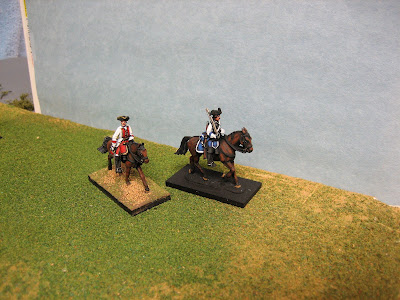 Here's a peak at some Minden SYW Austrians that I've been working on: infantry officer (left) and cuirassier trooper (right).

As a bit of a teaser, I have included a photo of the new Minden Austrian cuirassiers above. I've only painted one trooper so far, dressed in the distinct blue facings of the Alt Modena regiment, i.e. the only cuirassier regiment that did not wear red facing distinctions. I will try to work in a squadron of 12 Minden cuirassiers so that I can get a better idea of how they will look in mass.

I also finished off 24 French cuirassiers for my 1806 French army and boosted the 20th Dragoons up to 40 figures. I will post pictures within the next couple of days.
Posted by Der Alte Fritz at 12:41 AM