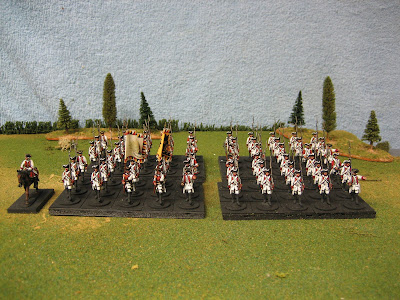 Regiment Andlau in a double column of grand divisions (click pix to enlarge).


I finished painting the final 10 figures of the Andlau Regiment on Sunday afternoon. This represents my first full 60-figure battalion of Minden Miniatures SYW Austrian infantry that I have painted. I also have Prussian Regiment IR34 Prinz Ferdinand painted. My recollection is that I bought these Austrian figures around this time a year ago. I don't know why it took me so long (OK, I know why -- I want to paint Prussians 8^) ).

I have a second battalion of Minden Austrians that I plan to paint this month. They will be painted as one of the light blue facing regiments, von Moltke. My general plan is to have one battalion painted for each of the major facing colors in the Austrian army: red, blue, light blue, green and violet. Then I will also paint an extra company of grenadiers from each of the 5 musketeer battalions and converge them into a Minden grenadier battalion. 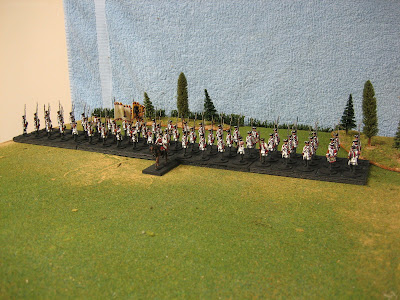 Regiment Andlau formed in a line of battle. (click to enlarge the picture). 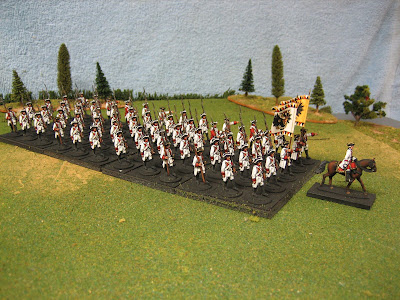 Column of grand divisions (not quite a road column, which would have fewer files in the frontage).

With the completion of this unit, I now have 10 battalions of infantry in my Austrian army plus reinforcements of 3 more battalions from Graf Frey's collection. So slowly, but surely, we are building our Austrian armies up the level of Prussians (24 collectively among Bill, Randy and myself).

Lobositz Game at Little Wars - February 7, 2009
We plan on hosting a BAR Seven Years War game at next week's Little Wars convention in Lincolnshire, Illinois (near Chicago) next Saturday at 11 AM. Drop in and visit or play if you are in the area. The game will be our take on Charles Grant's "Lobositz" scenario, as outlined in his recent book, "The Wargame Companion". I went to the local Home Depot store yesterday and bought a sheet of 1.5" thick pink insulation foam board and had them cut it into 3 feet and 2.5 feet segments. This evening, I will start gluing the boards together so that I can make the Lobosch Hill, a terrain feature that plays a prominent role in this battle. It won't be an elaborate affair, more like an Old School piece of terrain with the foam boards stacked atop one another and a little bit of spackle paste and paint and flock smeared all over the boards. We shall see how this project goes over the coming week.

The only other bit of game preparation is to terrain the bases of all of the Austrian figures that I have painted since Christmas.