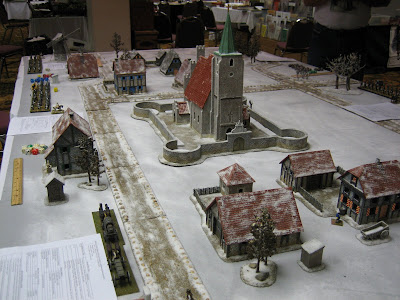 The village of Leuthen, as reconstructed by the talented Herb Gundt, for a game at the SYW Association convention in March 2007. Click the picture to enlarge.


We are inching ever closer to our game this coming Saturday February 28th and it appears that we will have 13 participants playing in the game. The game will feature 8 Austrian commands (3 cavalry and 5 infantry) and 5 Prussian commands (2 cavalry and 3 infantry). I plan to drive the hour or so to the Milwaukee suburbs tomorrow evening so that we can set up the terrain several days in advance of the game.

The picture above shows a small portion of the Leuthen winter terrain that Herb Gundt made for me a couple of years ago. The rest of the collection includes many more buildings, winter trees (sans shrubbery), frozen streams and snow covered roads. I have set up just the village for several skirmish games, so this will be the first time that I will have a table large enough to put everything on the table. That is something to look forward to, and it will be well photographed, no doubt.


I spent a good part of the evening doing the drudgery work of cutting out foam core bases for some of the new infantry battalions for the Austrians: Baden Durlach (Warrior Miniatures) and Lacy (RSM95 figures). I also terrained the individual bases for the RSM regiment this evening. It takes about one minute per base to spackle and flock each figure, so a battalion takes me about an hour to complete.

Some other news of note, this day my one hundred thousandth page hit was recorded, sometime this morning. That is quite an acheivement and I want to thank all of my visitors for taking a few minutes to stop in and see what is going on in the world of SYW gaming. Again, thank you all. On to the next 100,000 hits.
Posted by Der Alte Fritz at 6:18 PM