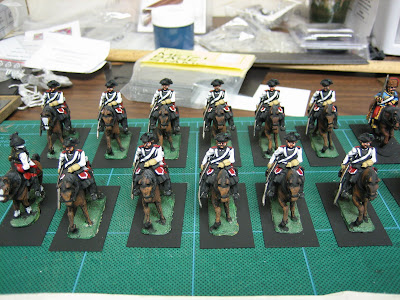 Hinchcliffe SYW Austrian cuirassiers representing the De Ville Regiment. These are the "repaints" that I did last month, but they look just like the other two squadrons that are done.


I am making decent progress on expanding my Austrian forces, what with a painting production rate of about one 12-figure squadron per week. At this speed, I can paint 48 figures in 4 squadrons of 12 figures in a month. On the infantry side, I am probably able to paint one 60-figure battalion in a month. Now there have been times when I have painted considerably more than this, but these are good basic production estimates of what I can do without killing myself by cramming too much painting into an unrealistic amount of time. Using 48 cavalry and 60 infantry figures as my standard painting speed, it becomes easy to plan out the production time for a new army or additions to an old army.

I also use a little spread sheet to chart my progress. As shown below, the Quantity depicts the final size of the regiment, Completed is obvious as to its meaning, Needs indicates the number of figures that are needed to complete the unit, and Order represents the number of castings that I will need to order for that particular unit. At the end of each line, I have listed the manufacturer of the figures that will be used for that unit of cavalry. Darn it all, I had everything set up in a nice table format, but the formatting gets wiped out when I publish the post. So the first number is the unit size, the second number is figures completed, the third number is figures needed to complete, and the fourth number is the number of figures on order).


The above table depicts where my Austrian cavalry is as of today. It also indicates units for which I already have figures on hand, ready to paint. The only exception is the Alt Modena cuirassiers, which will use the pending Minden Miniatures Austrian cuirassiers when they become available. I may also add another dragoon regiment in the future if Minden adds the dragoons to their range. I also have an opening in my hussar brigade for a potential Minden figure, but since light hussars are last on my list of things to paint, I figure that time will sort out the decision for me.

I finished the second squadron of De Ville cuirassiers earlier in the week and nearly have the third squadron completed as of Sunday evening. With a day off for Presidents Day tomorrow, I am certain that the 3rd squadron will be completed by tomorrow, so I have taken the liberty of adding it to the completed column for now. I have one more Hinchcliffe squadron's worth of unpainted lead in my inventory and a few remainders, so I will have to place a small order to boost the DeVilles up to 60 figures.