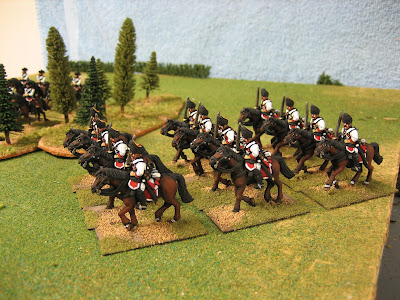 
We will be recreating the battle of Leuthen next Saturday February 28, 2009 at the Chez Chevert in Brown Deer, WI. I needed to have some pending game deadlines as incentive to get more Austrians painted and ready for table top action. Fortunately, my colleagues Graf von Frye and General Chevert agreed to this idea and so we fought Lobositz earlier this month and will conclude February with Leuthen. I really needed these game deadlines in order to get off of my duff and start painting Austrians. As you might have guessed, I would much rather be painting Prussians.

The picture above depicts a squadron of the horse grenadiers from the Austrian dragoon regiment "Althann". This has the distinction of being the only dragoon regiment to wear a white coat. All of the other regiments sport blue or red coats. So Althann is truely unique. The figures are from the wonderful Crusader Miniatures range of SYW Austrians. The squadron was largely done last week, save for the horses, which I put off painting so that I could tackle some other items for our Leuthen game. I now have 4 squadrons of horse grenadiers, with each squadron representing a different Austrian dragoon regiment. This creates a rather colorful unit with squadrons decked out in green, blue, red and white uniforms. 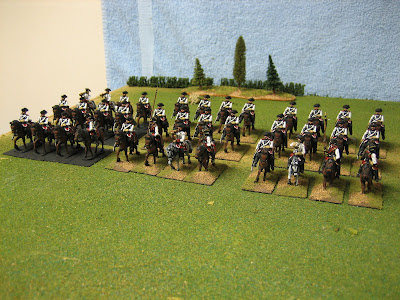 
The picture above presents the three squadrons of the De Ville cuirassiers that I have painted during the month of February. I had previously completed the first squadron in January, so I have been clipping these guys out at a pace of approximately one per week. The fourth squadron (shown above without the terraining on the bases) was done in two days, yesterday and today. Hinchcliffe figures are nice, but they are rather old school and lack the details that today's miniatures all seem to have. As such, I don't spend as much time on them as I would on say the Crusader horse grenadiers. Nevertheless, they look rather nice and the proportions look good. 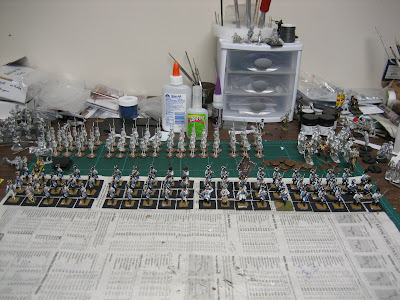 Fritz's work bench - Regt. Baden Durlach in the foreground and some Minden Austrians, unpainted, in the back ground.


Graf von Frye could not participate in our Leuthen game due to family commitments, and so we were to be without his brigade of three battalions of infantry, 3 squadrons of cuirassiers, and 2 squadrons of hussars. My initial thought was to merely substitute white-coated French for the Austrians. Afterall, the Family Grant did this in their original refight of Lobositz many years ago, so I considered substitution to be an honorable and acceptable answer.

Then I recalled that I had two 30-figure battalions of Warrior Miniatures '45 British that someone had painted as Austrians. I bought these at the Historicon flea market (bring & buy for those of you in the UK) circa 1990. With a moderate amount of touch up painting, I figured that I could easily create on BAR sized 60-figure battalion. One battalion was already painted as the Baden Durlach regiment, with light blue facings and turnbacks. The other battalion was painted as a Hungarian battalion. So I converted the Hungarians to Baden Durlach by repainting the trousers white, the gaitors black, and adding light blue facings and turnbacks. I left everything else the same because time was of the essence. The end result is shown in the picture above, with Baden Durlach waiting to get their bases terrained with spackle compound and flock.

You can see the start of my next Austrian regiment, Moltke, sitting behind Baden Durlach in its unpainted state. These are the wonderful Minden Miniatures. I mount each figure on a penny in order to give it a few extra millimeters of height. This way, their height is equivalent to some of the taller figures (Crusader, Suren and Stadden) that we use in our armies. I painted one sample figure the other day and was pleased with the way it turned out. So I am definitely looking foreward to tackling the rest of the battalion. The Moltke regiment will be my main project for March 2009.

I will try to post something each day this week as we get closer and closer to the battle of Leuthen.
Posted by Der Alte Fritz at 12:02 AM