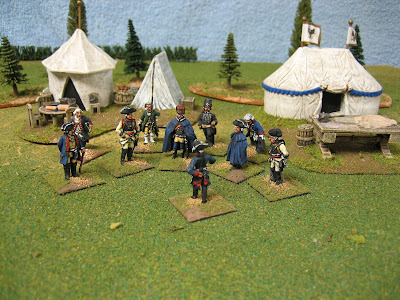 Frederick the Great delivers his famous Parchwitz Address to his officers prior to the battle of Leuthen in 1757. Click all pix to enlarge the view.


Tomorrow morning we will convene in Brown Deer, WI to refight Frederick's signature victory at Leuthen in 1757. To commemorate the pre-battle activities, I painted a few dismounted officers and posed them in a semi-circle around King Frederick, in a manner similar to the famous Menzel painting.


The battle has its fair share of high drama, starting with Frederick's famous Parchwitz Address in which he collected his officer corps together and told them what he expected from them in the coming battle:


The enemy hold the same entrenched camp at Breslau which my troops defended so honorably. I am marching to attack this position. I have no need to explain my conduct or why I am set on this measure. I fully recognize the dangers attached to this enterprise, but in my present situation I must conquer or die. If we go under, all is lost. Bear in mind, gentlemen, that we shall be fighting for our glory, the preservation of our homes, and for our wives and children. Those who think as I do can rest assured that, if they are killed, I will look after their families. If anybody prefers to take his leave, he can have it now, but he will cease to have any claim on my benevolence. 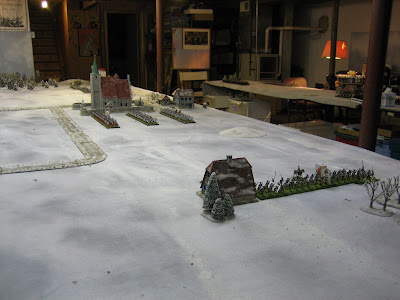 A view of the Leuthen battlefield prior to the fight. The Austrians are marching from Breslau and taking postitions across the Schweidnitzerwasser in the fields about Leuthen. A battalion of Wurttemburgers can be seen posted at Sagchutz, on the left wing of the Austrian army.


Christopher Duffy cites an interesting story about the Austrian activities on the day before the battle. Daun rode along the length of the Austrian army to inspect the ground, asking peasants the names of the towns or various terrain features (few that they were) on the field. Daun noticed a church tower that was rising above a certain hill. "What is that" he asked the peasant. The man assumed that Daun was talking about the hill and replied, "Your Excellency, that is the hill from where our king drives the Austrians every year." Daun turned to his entourage and said, "Gentlemen, I don't like the sound of that!" Leuthen was, in fact, the training ground where the Prussian army held its annual maneuvers before the start of the Seven Years War. (from Prussia's Glory, by Christopher Duffy, page 139-140). 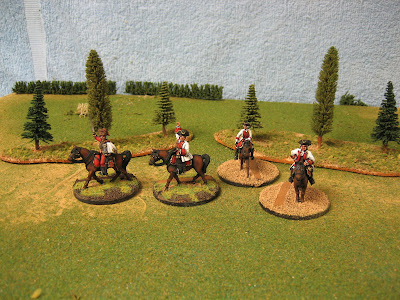 Some new additions to the Austrian staff (left to right): General of Cavalrie Nadasti, Graf Colloredo, Andlau and Starhemberg. 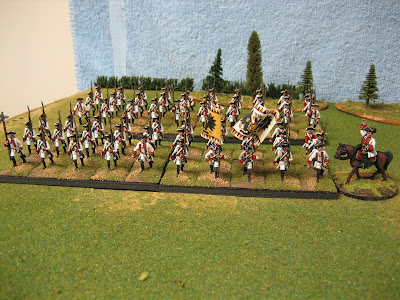 
I recently added another battalion of Austrians to the army to use in this game. This is the Regiment Lacy comprised of RSM figures that I painted a couple of years ago. I was planning on using the sixty figures for a different project, wherein the battalions are only 20 figures, but I decided that the particular project was on deep hold, and that I might as well use the figures for my BAR Austrian army. So here they are, as seen in the picture above. The flag bearers are simply the advancing pose, with the back foot cut off of the base, and then the raised back leg is pushed until it is touching the ground. I then cut the musket out of the figure's hands and replaced it with a wire flag pole.
Posted by Der Alte Fritz at 10:59 PM