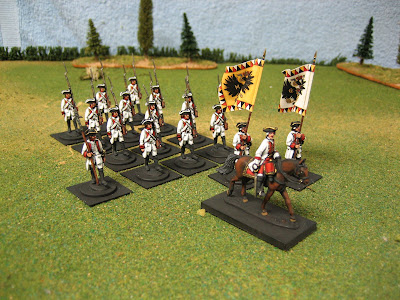 
I spent a part of the evening painting one of the new Minden SYW Austrian mounted colonels, which I painted as a general in his red waistcoat and breeches. He would be one of the lower "General de Bataille" commanders with lapels and gold lace affixed to the border of the lapels. The coat pockets should also be bordered in gold lace. This fellow will command my growing brigade of Austrian Minden Miniatures. 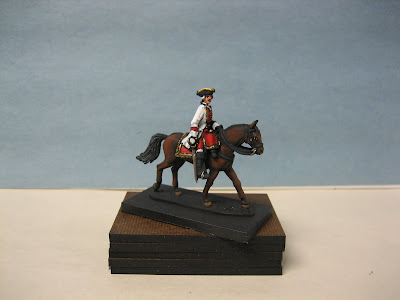 Here is a closer view of the Austrian general.


You can see a close up view of the mounted colonel figure and it gives you a sense for how elegant the horses from the Ansell Stud Farm are. Richard has done the impossible: he has sculpted a horse that surpasses the old Stadden H1 and H2 30mm horses. Let me put it another way, this is one of the best horse figures that I have ever seen in the miniatures world. Outstanding figures like this are a true joy to paint. I black primed the figure, then layed down a coat of umber brown and then dry brushed a soft coating of ruddy brown (both colors are from the Reaper Pro Paints range of paints).

Over the weekend I will post part two of the list of Austrian "German" regiments that had pom pons and sort them by facing colors, as I did to the list sans pom pons.
Posted by Der Alte Fritz at 12:06 AM