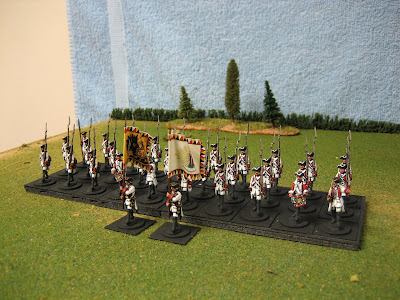 
I have now finished 32 of the 60 figures that I will need for the Austrian regiment Andlau for our convention game at Little Wars on Saturday February 7, 2009. I think that I have a better feel for how to paint these figures now, so the second batch of 15 figures (+2 flag bearers) went a little bit faster than the first 15 figures. By the way, I think that the Minden flag bearers are superb. You have to drill a hole through the hands with a pin vise tool, but then you will never ever have to worry about the flag pole breaking off of the figure. This is a good thing.

The next 18 figures are coming along nicely and they ought to be completed by the end of the week. That will give me 50 figures in the battalion. I ought to be able to finish the final 10 figures in time for Little Wars, but it will be a near run thing, especially since I will have to terrain the bases and make movement trays. 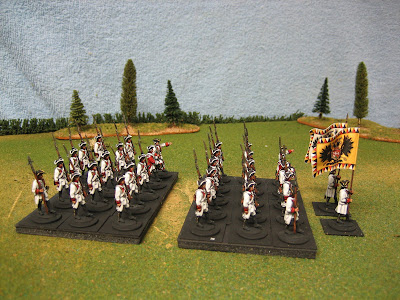 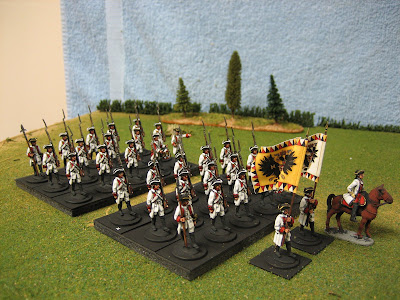 Frontal view of the column with an RSM mounted officer to show the relative similarity in size.


I received my shipment of Minden Prussian infantry and artillery plus some Austrian artillery and mounted officers in the mail today. The Prussians will be painted in the new Hesse Seewald uniforms; however, I have to finish the Austrians first. I am also eager to paint the Austrian mounted colonel as it is a nice figure (well duh, aren't they all nice) and I want to try painting the exquisite horses that Richard Ansell has sculpted. Based on the mounted officers that I have seen with my own eyes, I know that I will be absolutely blown away when I see the cavalry. The anticipation is exciting.

I noticed that the Austrian infantry does not have a pom pon on its tricorn. That is actually OK since a large number of regiments did not have the pom pon. I have counted as many as 22 of the "German" musketeer regiments sans pom pon (and 20 "German" regiments had pom pons in case you were wondering). Here is a list of the units that do not have pom pons:


My plan is to have up to six Minden Austrian infantry regiments in my army and each battalion will be in a different facing color so that I can tell them apart (because otherwise, not much else distinguishes one regiment from another in the Austrian army and 6 battalions all in one facing color would get confusing). I will then paint a company of 6 to 9 grenadiers for each of my Minden regiments and then converge the Minden grenadiers into one battalion of 36 to 54 figures. I am sure that I will be tempted to paint a couple of Hungarian battalions as well. My goodness, this project could really grow.
Posted by Der Alte Fritz at 10:03 PM