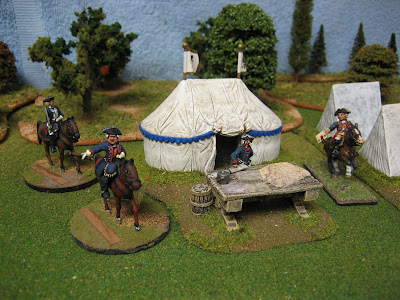 
My painting production in March 2008 slowed down a little bit, as I only logged 54 Olley Painting Points during the month. An infantry figure is worth one Olley Painting Point and a cavalryman is worth two OPPs. I attribute the decrease from January and February to Spring Vacation and getting ready for two conventions on back to back weekends.

The Bevern figure is from the Foundry Prussian senior generals pack, which includes Frederick. I haven't been able to find a good picture of Bevern, but I imagine him to be slightly older and to be somewhat heavy set and jowly in appearance. Thus the Foundry figure was perfect. I didn't care for the Foundry horse though -- too small for the figure. So I borrowed a stallion from my stable of 30mm Stadden horses and placed Bevern on the horse. You can see the result in the picture below. 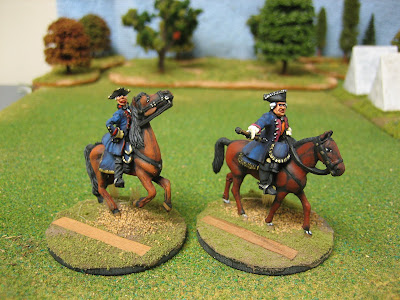 Prinz Moritz (left) and the Duke of Bevern (right). The strips of wood on the base will be where I glue the paper nameplate for the figure.

Prinz Moritz is the Elite Miniatures Prussian mounted officer on the rearing horse. He has a rather jaunty and haughty look to him that makes him suitable for a senior officer in my Prussian army. Since the Elite figure and horse were made to go together, I used the the Elite horse.

A note on the tent shown in the picture at the top of the page: this was painted and assembled by Herb Gundt, royal architect to Der Alte Fritz. I thought that his rendition of a Prussian commander's tent was outstanding. Herb always does a good job of creating a little vignette that enhances the overall appearance of the model. He also made four sections of enlisted men's tents that you can see in the background. These will appear in many of my games going foreward.

Next friday (April 4th) I have another wargame convention game at Little Wars, in Lincolnshire, Illinois, which is just north of Chicago. Bill Protz and I are putting on another French vs Prussian game using Bill's BAR rules. If you are in the area at 7pm on Friday, then drop by and join in on the fun.

The rest of April will be devoted to the continuing buildup of the Austrian cavalry. I currently have a dozen Crusader SYW Austrian horse grenadiers and also plan to add another squadron of dragoons and cuirassiers to my forces. That would be 36 cavalry figures, or 72 Olley Painting Points for the month. I try to target 60 to 70 points as the maximum amount in a month. I could paint more, but then life gets a bit out of balance if I do anymore painting than that. Balance is the key to a happy life and a happy wife.
Posted by Der Alte Fritz at 10:36 PM