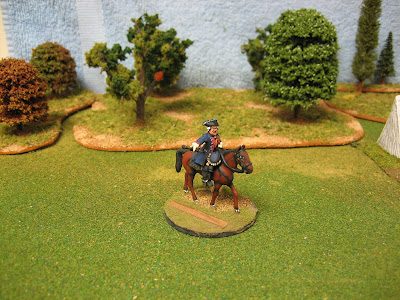 
The battle of Reichenberg (April 21, 1757) is an interesting little action that occurred during the opening days of Frederick the Great's invasion of Bohemia during the spring of 1757. It matched 22,000 Prussian troops under the command of the Duke of Bevern against a similarly sized Austrian corps of 20,000 men commanded by Graf Konigsegg. Bevern was able to turn the Austrians out of a very strong defensive position by successfully turning their left flank, which appeared to be anchored on a mountainside. This compromised the Austrian entrenchments in the center and their defense of the town of Reichenberg, on the Austrian right, and caused the withdrawal of Konigsegg's corps into Prague.

The battle receives little attention from SYW historians, who are more apt to focus on the big battle at Prague on May 6, 1757. It holds interest to me, as a wargamer, due to its relatively small size and the fact that the victory was achieved by someone other than Frederick or Prince Henry. The Prussian army consisted of 20 battalions, 25 squadrons and 12 field guns/32 regimental guns. The Austrian contingent included 24 battalions and 49 squadrons plus an undetermined number of artillery pieces. 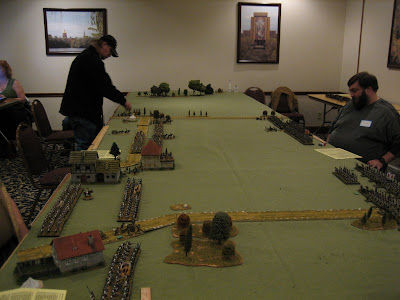 Opening game setup with the Austrians on the left and the Prussians on the right. The town is located in the center and the wooded area in the far end of the table represented the mountainous area of the field. Great liberties were obviously taken with the terrain to boil it down to a playable table top game.


I hosted a stylized refight of Reichenberg at this year's Seven Years War Association Convention at the end of March 2008. The Prussians had 12 battalions and 12 squadrons of cavalry and an amount of artillery that I can not recall. (approximately 1 by 12 pdr per infantry brigade plus 2 regimental guns). The Austrians had only 9 battalions and 8 squadrons, but had the advantage of defensive ground. The Prussian players elected to ignore their right wing, demonstrating with their cavalry, while attacking the left flank in force. 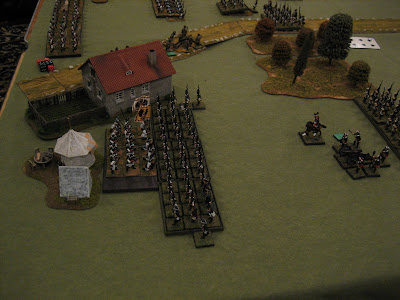 Prussian attack on the Austrian camp on the Prussian left flank. 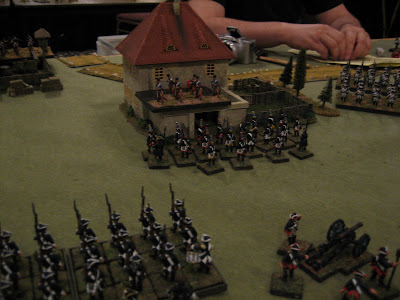 A converged group of Prussian pioneers assault the village with their zimmermen leading the way. The village was defended by a small contingent of Croats, who fought to the last man. 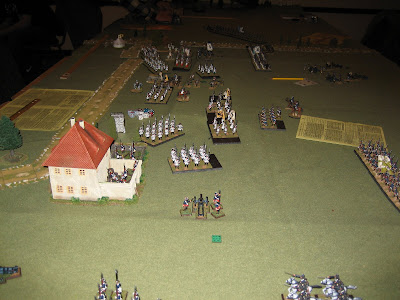 Substantially outnumbered, the Austrians were quickly evicted from the village by the Prussian attack. The Austrian brigade in the center is seen dispatching several grand divisions of infantry to shore up their right flank. 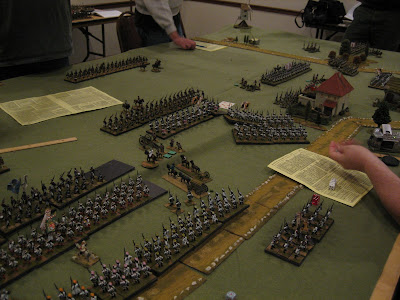 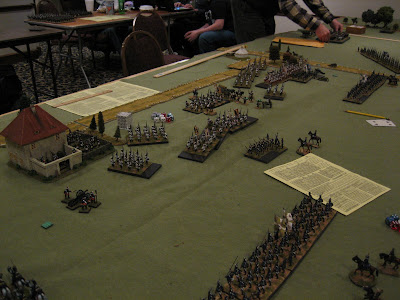 The Austrians have repulsed the Prussian advance in the center, but at great cost. Note the fragments of Austrian regiments holding the ridgeline. Bevern now throws in his reserve of IR24 Schwerin (foreground) while the Prussian left is now swinging around through the village to make the Austrian center untenable.
t 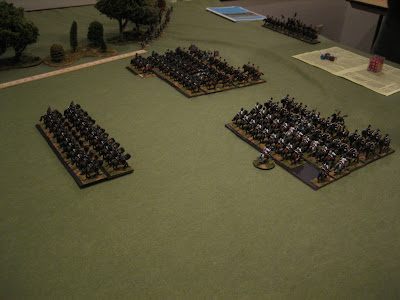 The cavalry battle on the Prussian right flank. The Austrian cavalry commander, though substantially outnumbered, did a splendid job of holding off the Prussian cavalry for most of the game. 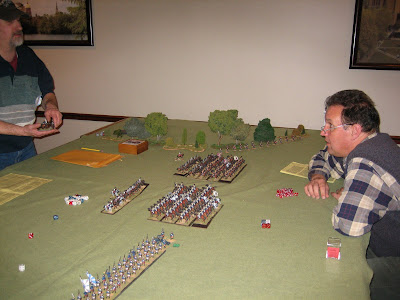 Weight of numbers favored the Prussians as they finally drove off the Austrian cavalry by the end of the game. The Austrians now had both flanks collapsing and had to withdraw their army from the center.
Posted by Der Alte Fritz at 12:07 AM