The Standard Has Been Raised 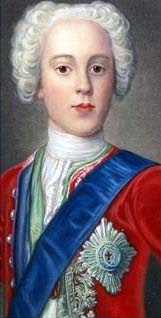 Have you ever embarked on a wargaming project and later wondered "what was I thinking?".


Well, I hate to say it, but this has happened to me. My bete noir is the Jacobite Rebellion of 1745. I have always had a keen interest in the topic, as Scotland and its history are one of my favorites. It probably goes back to the days when my father used to read me stories from Sir Walter Scott's Tales of a Grandfather which is Scott's history of Scotland from the tenth century up through the Forty Five. I especially liked the chapters about the War of Independence in the 1300s with Robert the Bruce, William Wallace and James Douglas (the Black Douglas). But I digress, let's get back to 1745 and the Raising of the Stuart king's Standard.

OK, so I like everything about Scotland, from kilts and pipes to whiskey and salmon fishing. That is a given. Let me also say that I have no particular leanings to either the Jacobites or the Hanoverians. I like them both. I have the 42nd Black Watch Highlander regiment in nearly all of my horse and musket armies: Fontenoy, Minden, Brandywine and the Napoleonic Wars. So the prospect of painting a kilt or two doesn't deter me. But then again, we were only talking 30 or 40 of them, with regard to the Black Watch. With the Forty Five, I am looking at the prospect of painting 300 or more Highlanders with nearly all of them having unique paint jobs. It is one thing to assembly line 40 Black Watch figures off the painting table, and quite another to do 300 Jacobite clansmen for the Forty Five.

As I said earlier, "what the heck was I thinking?"

The most recent push into this madness was provided by the "Elector vs Empire" blog (see the link on the left hand side of this page). One of the running stories on EvE is that the Tradgardlanders (from some Baltic country that is similar to Norway) have invaded the Shetland Islands in the middle of the winter. Now as the prime minister of the fictional 18th Century nation of Britannia, my first inclination was to say, "let them have it - the elements will finish them off, if not the Royal Navy in the Springtime." Concurrenlty, the Tradgardlanders also arranged for the Duke of Albany, one Charles Edward Stuart, to land in Scotland with a small band of supporters. This is all done via free kriegspeiling.

However, those perfidious Gallians (French) decided to lend aid, comfort and troops to the Jacobite cause in order to create some distraction for the Britannian army currently holed up in Minden. Well, push came to shove, and after way too many Diet Lime Cokes, Bill Protz and I were ginning up a sort of informal Jacobite Rebellion campaign for us to play over the next couple of months.

The campaign is very simple. The Jacobites have landed in Scotland and they have to win three consecutive battles in order to effect a Stuart Restoration. Conveniently, there were three principal battles during the Forty Five: Prestonpans, Falkirk and Culloden. The Jacobites will start out with a small force of about 6 clans and a half regiment of French trained troops. If they win the first battle, then they get more clan and French reinforcements in the second game, and even more for a third game, should they win those. Any single loss of a battle means that the Rebellion has been put down. 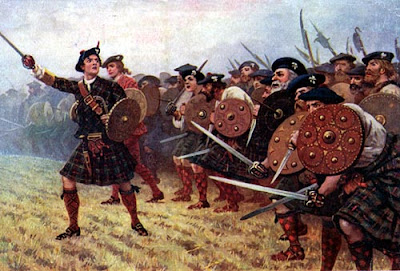 The immediate problem at hand is that neither myself nor my regular wargaming Pards, Bill and Randy, have any Jacobites. What we do have though are a lot of 18th Century Black Watch Highlanders. Bill has 118, Randy has 72 and I have 50. They are all wearing kilts. Hmm, what would you do?

So we decided that we could fill out the Jacobite army using red-coated, kilt-wearing Highlanders with a small sprinkling of American Provincial blue coats as Lowland regiments. And the French Fitzjames Horse cavalry regiment could be recruited from Bill's SYW French army. Thus, assuming around 30 figures per clan regiment, we can generate 8 Jacobite clans from the 240 Black Watch figures, 1 regiment of Irish Piquets using French troops, and 2 Lowland regiments using the New Jersey Blues from America. There you have it, instant Jacobite army!

Only a madman would even think of adding more "genuine" Jacobite units, right? Oh no. Oh yes, Fritz got a bee under his bonnet to start painting Front Rank Jacobites for this campaign. The fact that he was able to buy some 300 figures at a nice discount only added fuel to the fire. So now I am busy at Ye Olde Painting Tableaux applying plaid paint to the first 20 Jacobites. I chose the Stewarts of Appin only because their flag is easy to paint free hand (a gold saltire on a blue background).

So I have committed myself to painting at least one clan for now, maybe two, before our first battle on May 3, 2008. I also have some figures to use for Prince Charles and Lord George Murray and some standard bearers to paint (this will be inserted into the various Black Watch ersatz Highlander regiments for our campaign). So I have my work cut out for me over the next three weeks.

As for the Hanoverian or government troops, we will use existing British regiments. We have 8 of these on hand, collectively, so nothing more is required to get the red coats up to snuff.

For rules, we intend to use, what else, Batailles de l'Ancien Regime ("BAR") with some minor modifications to give the Jacobites some hitting power in the melees. Jacobite units will be around 20 to 30 figures, while the British Government forces will be 40 to 45 figures. Same troops that we already have, it's just a matter of removing the unneeded figures from their movement trays. This is one of the advantages of the movement tray system of basing that we use in our BAR games. It is easy to resize the units to the desired strengths.

Well, wish me luck in my plaid paint party. In truth, I fear that it is a sinister Gallian plot devised by le Marquis de Silhouette to deter Der Alte Fritz from adding to his Prussian forces. We shall see.
Posted by Der Alte Fritz at 7:26 PM