The Stewarts & Camerons Have Arrived! 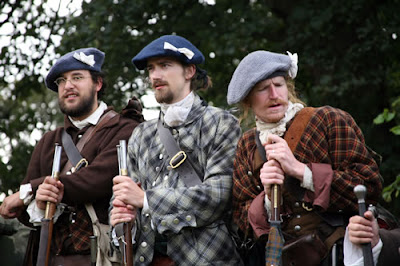 Some re-enactors at Prestonpans in 2007.


My computer has been down for the last four days, so I have not been able to keep everyone up to date on events in the Jacobite Rebellion project. First of all, I have to say that I have been surprised by the amount of comments and traffic that this subject has generated. The posting of April 15th has generated more comments than any other topic so far. Please feel free to click on the comments link at the bottom of each article and let me know what you are thinking. It is much appreciated and I enjoy reading everyone's comments.

I am making good progress on my Jacobite army. As of today, I have the first 30 Front Rank figures painted and another dozen in various stages of painting or preparation. I do not have them based yet, so I posted the picture that you see above for some visuals. So the Appin Stewart regiment is completed and I am now working on the Camerons.

One problem that I noticed was that in the bags of figures that I purchased, there were too many Highlanders carrying broadswords and lochabar axes, and not enough fire arms. It is fairly well established (from first hand accounts and battlefield archeology) that the Jacobite forces were sufficiently armed with muskets. So I will probably need to purchase more figures with muskets. In the meantime, I will have to make do with what I have and just pretend that they have muskets when it comes time to fire at the Government troops.

I will promise to post some pictures of the figures that I painted later in the week, after I have had a chance to terrain the bases and paint a flag or two. I found some old paper Jacobite flags that I bought from a company, years ago, called Signifer - located in the US. I may use these flags in my army, especially for the more complicated patterns. It does not look like GMB Designs makes flags for the Forty Five, much to my regret. Another option is to hand paint the flags on paper or linen. I have a feeling that I will be making some temporary flags and then coming back later to make nicer flags. I really want this army to look nice, because it is a project that I have wanted to paint for a long time (some 15 plus years, I would imagine).
Posted by Der Alte Fritz at 12:11 PM