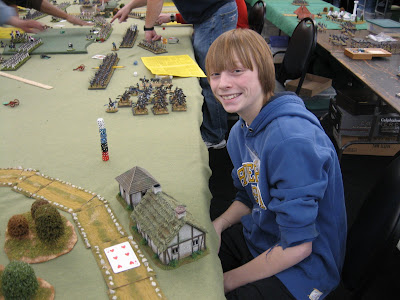 
HMGS Midwest held its annual Little Wars convention this weekend (April 4th through 6th, 2008) at the Marriot Lincolnshire resort, just north of Chicago. This year's convention theme was "Artillery - King of Battles". There were approximately 200 game events and 42 dealers attending the convention, so this gave me plenty of opportunity to watch some innovative participation games and to spend a lot of money in the dealer area.

Among my shopping "finds" were some Black Scorpion 32mm Pirates and Royal Marines that will eventually become a part of Milady de Winter's band of henchmen and cut throats in the mid 18th Century. I also purchased a fair number of George Nafziger's studies on Napoleonic warfare to use in my development of a Napoleonic version of Batailles de l'Ancien Regime ("BAR") rules. I also stocked up on weapons packs from RSM95 figures. RSM figures are THE figure range of choice for many of my Old School Wargaming compatriots. 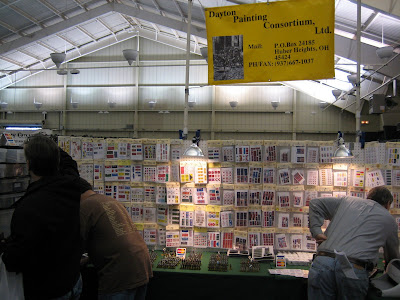 RSM95 figures were sold at the Dayton Painting Consortium booth all day. 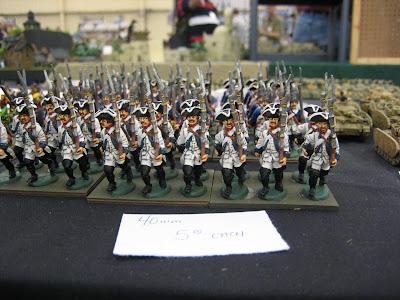 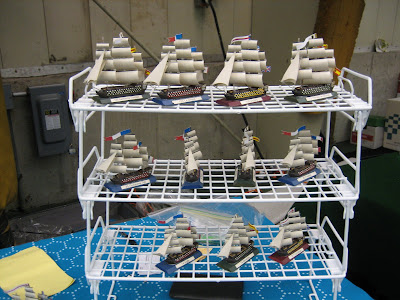 Portsmouth Miniatures was selling pre-painted Tall Ships suitable for 18th Century and Napoleonic naval warfare. This is a very attractive product, extremely durable and easy to assemble. I was tempted to purchase a fleet or two for out SYW campaign.

Without further ado, let's take a look at some of the games at Little Wars: 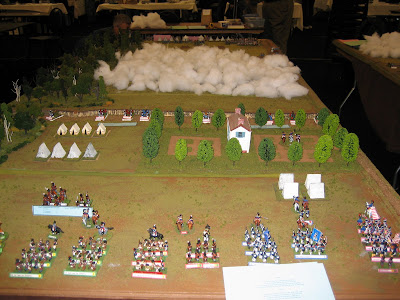 Greg Novak's Battle of New Orleans game showing the battlefield, and all of the morning fog, from the perspective of Andy Jackson's army. 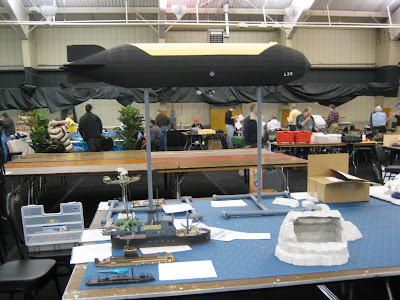 Giant Zeppelin and other seacraft converge on the Antarctic in Mark Feldman and Mike Clarkons' game "Springtime in the Antarctic". 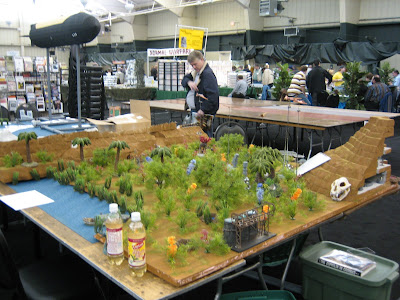 Who knew that there was a tropical jungle crawling with dinosaurs beyond the ice shelf of the Antarctic?

Pirate games were in abundance at Little Wars, arrgghh, matey. Who doesn't enjoy a little bit of buccaneering and treasure hunting? 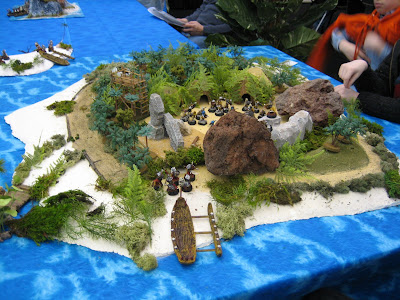 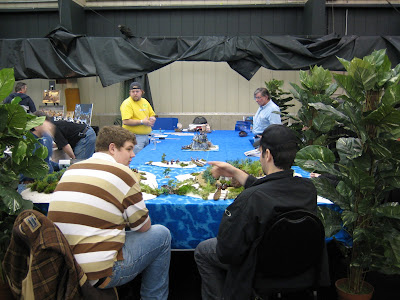 The award for best use of artificial plastic plant scenery goes to the game shown above. The top picture shows a close up of one of the islands on the table. 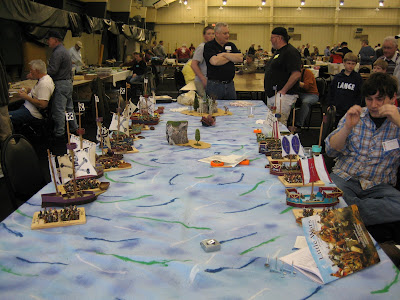 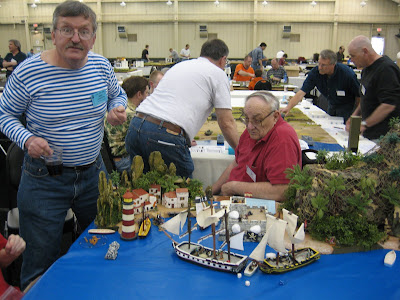 The game judge looks the part with his sailor stripes.

World War II continues to be a popular theme at Little Wars and there were a number of nice looking games, including the Last Square's game (shown below) and a series of Flames of War games depicting scenarios from the Normandy campaign (Ste Mere Eglise, Pte du Hoc, Omaha Beach, Sword Beach, and Orne River Bridge). 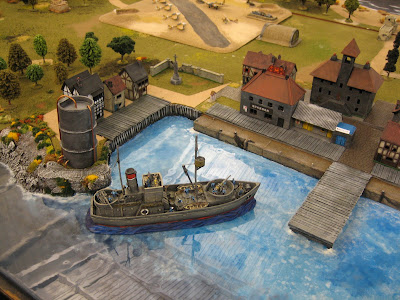 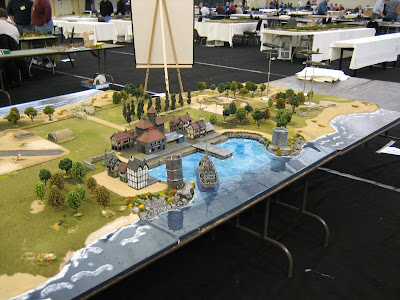 The Last Square's WW2 game feature superb terrain and modeling, as shown in the two pictures above.

The team of Jeff Cohen, Mark Pawelski, John Reed, and Kevin Seward hosted 5 Normandy scenarios throughout Friday and Saturday. The group used Flames of War rules and each game featured excellent terrain that was a visual treat to behold. A couple of pictures are shown below: 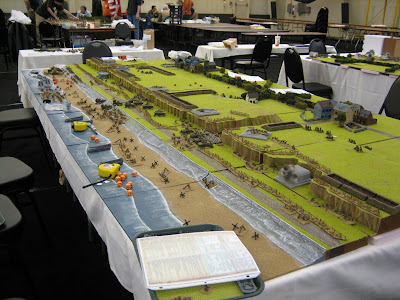 Omaha Beach game using Flames of War rules. This was one of five scenarios hosted throughout both days. 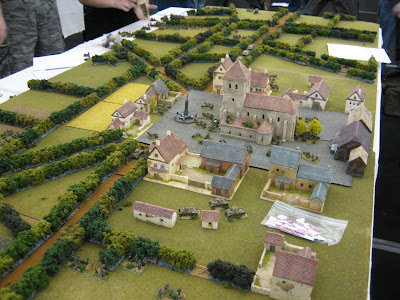 Ste Mere Eglise, one of the Flames of War Normandy games in 15mm. 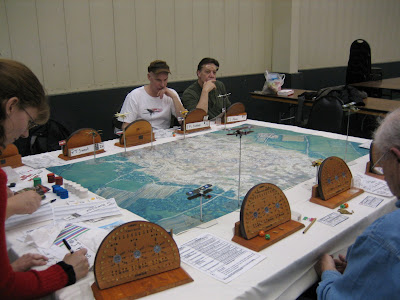 Aerodrome returns once again. In fact there were two different tables running the same system.

I have always thought that the WW1 dogfight game shown above is one of the more innovative games that I have ever scene. It has been a staple of Little Wars conventions. Each player has one plane and his own control panel. Little holes are drilled into the panel and you stick little ammo shells into the board to depict the amount of ammo that you have in your guns. The judges run this game numerous times throughout the day and it is popular with kids and adults alike. 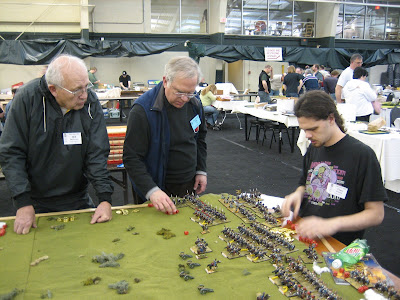 Charge of the Light Brigade game hosted by Paul Petri and Brian Vizek. Bill Protz (center) leads the brigade into the Russian guns.

Paul Petri and Brian Vizek hosted an interesting scenario featuring the Hollywood version of the Charge of the Light Brigade. They even had Errol Flynn and Harry Flashman figures. The Russians received bonus points if they could pot old Errol or discombobulate old Flashy. 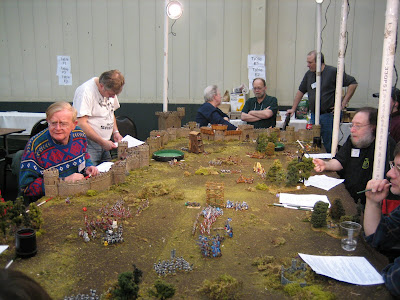 It just wouldn't be Little Wars without one of Uncle Duke's splendid games. This year he brought a medievil seige game and the usual assortment of lights, cameras and action. 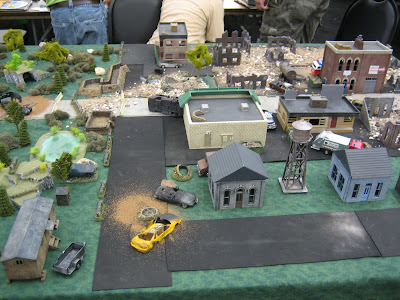 Bill Protz, Randy Frye and I hosted one of our big battalions SYW battles on Friday night. The game featured Bill's Batailles de l'Ancien Regime ("BAR") rules. I will provide an after action report of the game within a couple of days, but in the meantime, here is a little teaser to tide you over: 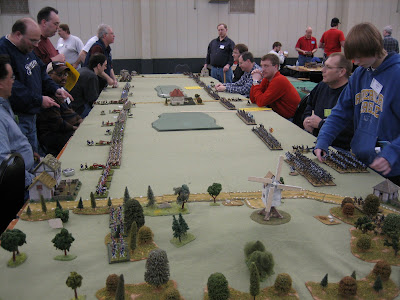 Initial deployment of the French (left) and Prussians (right). 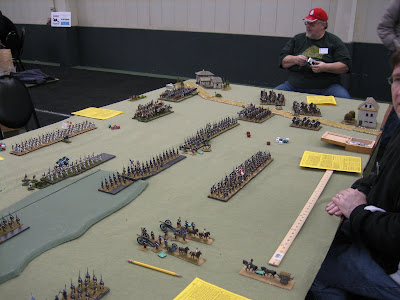 More linear warfare in the BAR game as the Prussians advance in perfect order. 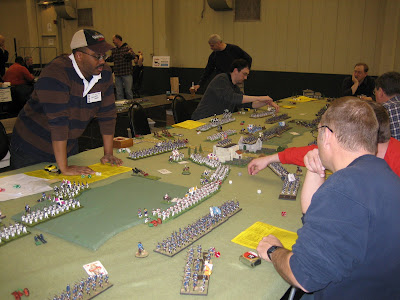 The armies converge in the center to capture the all important town. 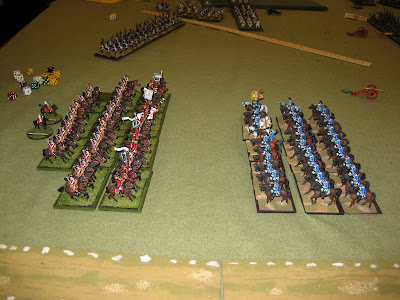 Saxon Rutowski Cheveau-legers (left, in red) hew their way through some Prussian dragoons (right, in blue). After they were done with the dragoons, they doled out a few whacks on the Prussian Black Hussars and ran them off the table too.
Posted by Der Alte Fritz at 9:15 PM