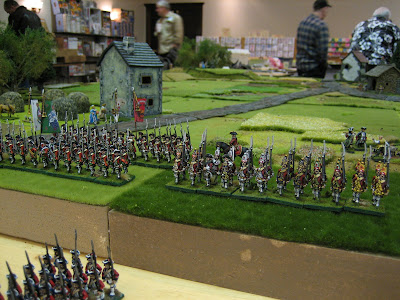 
I have been admiring the Venture Miniatures range of 28mm SYW Hanoverians for a number of years now, and I think that it is time to give this fine collection of figures its well deserved accoulades. The company was formed by Jude Becker and some of his friends who have an interest in the Seven Years War in general, and specifically in the Hanoverian army, which fought as an ally of Great Britain during the war (1756 to 1763).

The Venture range of figures current offers Hanoverian musketeets, grenadiers and the necessary officers, musicians and NCOs that one would need for a wargaming army. The company added the Hanoverian horse and dragoon regiments, horse grenadiers, artillery and artillery crew within the last year. Jude advises me that the SYW French will soon be available. I saw some metal masters of the French at the SYWA convention and they look like they will be just as nice as the Hanoverians. 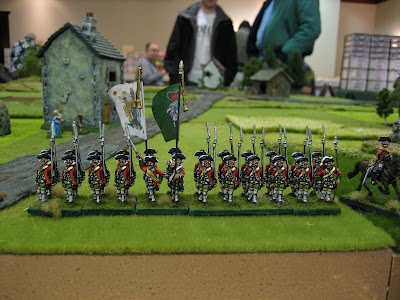 The infantry offerings, shown in the picture above and at the top of this blog page, include 3 grenadier poses (marching, officer with drawn sword, and fifer) and 6 musketeer poses (marching, officer, officer with upright sword, NCO with spontoon, standard bearer and drummer). All figures are designed to depict a battalion of infantry on the march. There are also some mounted infantry officers and two styles of horses (cantering and walking). 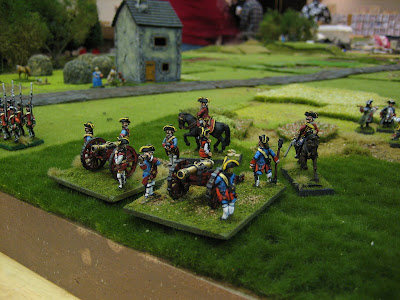 Hanoverian artillery crew and cannon. Note the mounted officers in the background.

The artillery component of the range includes 5 poses: crew with spongestaff, linstock, holding cannon ball, trailspike and an officer with telescope. There is also a rather large 12-pounder that I saw. I don't recall seeing a smaller calibre of cannon, but I'm assuming that these are available as well. I like the fact that there are 5 poses, rather than the industry standard 4 poses because it gives you a little more variety. 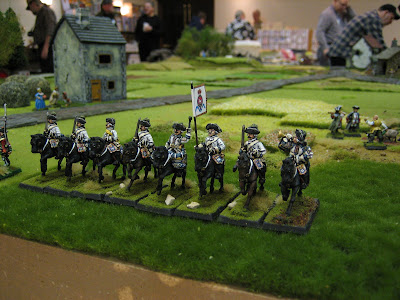 The Hanoverian army had two types of battlefield cavalry: dragoons and heavier "horse" regiments. Venture provides both types and they are working on some figures to represent Luckner's Hussars. 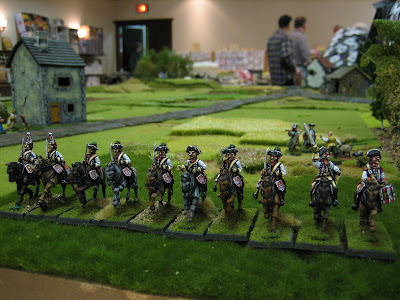 Hanoverian Cavalry Organization
The regiments of Horse were the standard heavy line cavalry and were descendants of the earlier cuirassiers of the 17th Century, although the cuirasse had been abandoned by the time of the War of the Austrian Succession and the Seven Years War. The dragoon regiments were originally meant to be mounted infantry. Accordingly, they included a company of mounted grenadiers. This is how one can distinguish the dragoons (they have horse grenadiers) from the horse regiments (they do not have horse grenadiers). The dragoon regiments were larger than the horse regiments, so that "horse holders" could be included to hold the horses while the troopers dismounted and fought on foot. However, by the mid 18th Century, it was rather rare for dragoons to fight dismounted.

Hanoverian horses were sought by all of the armies in Europe, and the horsestock was raised at the national stud in Celle since 1735. Accordingly, the Hanoverian army was usually able to remount its cavalry regiments with native grown horsestock.

How to order Venture Figures
You can contact Venture Miniatures via its website at http://ventureminiatures.com for a complete list of stock numbers for the individual figures as well as ordering information and postage requirements. The figures are $2.00 each and the horses are $2.50 each. The company accepts personal checks and money orders. You can also send them a letter at Venture Miniatures, PO Box 2223, Ames, Iowa 50010 in the United States.

Figure Compatibility
I do not have any samples in my hands and thus I cannot measure them and compare them to other figure ranges. Visually, these are thin and have correct anatomical proportions, so that puts them high on the list as far as Der Alte Fritz is concerned. Just eyeballing the figures, I would say that they would be compatible with RSM95 and Minden Miniatures in terms of height, slenderness and overall proportions. The sculpted details on the figures are done to a high standard. I intend to use these figures when I get around to painting Hanoverians, so I am backing my endorsement of the Venture range with my wallet. I think that most wargamers would be very pleased with these figures in their armies.