A List of the Figures that I Painted in 2018


Here is a list of all of the wargame units that I painted in 2018, all of which are Seven Years War figures. Click on the links to go to the blog post that covers each unit that I painted. 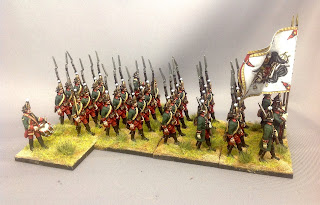 I also painted 4 Russian artillery pieces, each with 4 crew plus limber teams of 4 horses, 1 rider and 1 limber. Here

If my math is correct, the total number of figures painted in 2018 was 652 figures. There are probably more than that if I include some vignettes that I made and some samples that I painted for the Fife & Drum on-line webstore and catalog.

Now in some of these instances, I posted the date when I flagged and based both battalions of a Prussian or Austrian battalion. So for example, the IR2 von Kanitz Musketeer Regiment indicates 2 x 32 battalions = 64 figures. I did not paint all 64 figures at one time, but rather, over the course of several weeks. My painting pace is approximately one unit of 32 figures per week, although I do not paint every week. I wish!