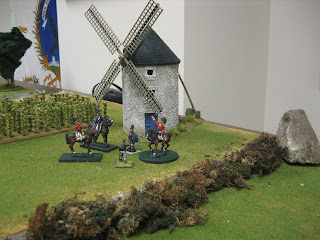 
This afternoon we christened the Man Cave with its first wargame since the remodelling, and tried out our new rules for the Napoleonic Era using a 1:10 ratio of figures to men and the BAR rules system. I will post more about the game tomorrow, but wanted to use this opportunity to show off some of the figures that I have been working on over the past several weeks.

Our group had established a "painting challenge" with a deadline of November 5, 2011. The only problem was that I was in the midst of a deep painting funk and couldn't bear the thought of picking up a paint brush. As a result, I had nothing to show on the deadline date. However, with today's game coming up, I knew that I had to whip out the Royal Horse Artillery and two companies of the 5/60th Rifles to use in this game, so the pressure was on. 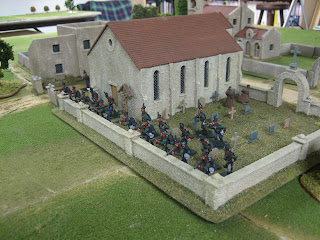 24 members of the 5/60th Rifles defend a churchyard.

I started with the 24 rifles that we would need for the game since they are relatively easy to paint. The only problem was trying to figure out which color to use for their trousers. Various sources list blue, grey and even rifle green or brown (for that on campaign look). Since there seems to be no definitive proof, I opted for the more colorful blue pants. I painted a couple of the figures with grey, but didn't like them as much. For extra fun, I found an old Redoubt Sergeant Harper figure carrying his famous 7-barrel Nock Volley Gun. I can't wait to see him actually use it in a game.

Next on the list was three Royal Horse Artillery cannon with crew and limber teams. I opted for the Elite Miniatures range since Elite has the full limber crew in its range. 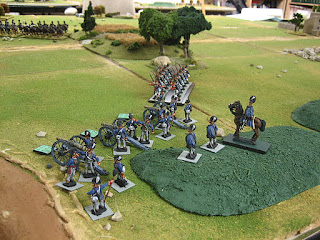 Elite Miniatures RHA deploy against the French somewhere in Spain. A grenadier company of the 83rd Foot provides support.

I started the three gun sections on Veterans Day holiday (friday) and had the guns and crew done by the following Sunday. Next came the limber and crew (4 horses, 2 horse rider, 2 limber riders and 1 limber = 9 pieces). I only had enough pieces to assemble and paint two limbers, but fortunately I was able to borrow a third limber for our game.

And finally, here is the complete 83rd Regiment of Foot deployed in line. It currently has 78 figures and I have one more centre company of 12 figures on hand that I could add at a later date. I finished these figures this past summer, but never had them on their movement tray for a photo shoot. You really get the senses for how long the 2-rank line is when compared to the French 3-rank line. 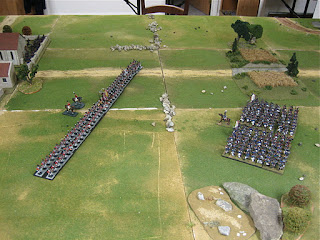 British 2-rank line deployed to receive two French battalions in attack column. Here you get a good idea of how easy it is for the British to overlap the columns on the flanks. 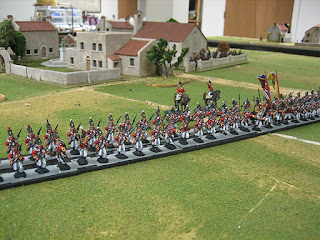 Closer view of the 83rd Regiment.

As you can see, I still have a lot of figure terraining work ahead of me to give the units a finished look. But I like the way that this project is shaping up.

Tomorrow: a report of the battle at Lago Bosco in Spain.
Posted by Der Alte Fritz at 11:07 PM