Dad, Do You Know Anything about the French & Indian War? 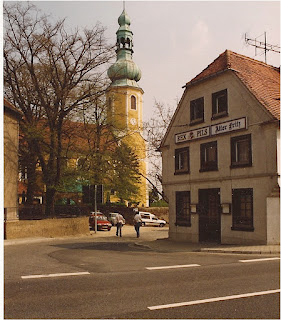 Hochkirch Church and the Alter Fritz Gasthaus. This has nothing to do with the French & Indian War, but I wanted to try out my scanner. Picture taken in 1994 on the Duffy Tour.
So my wife and daughter come home this evening from a school outing and Herself announces that it is time for Lady Emma Cuddlestone-Smythe to do her homework. Herself asks me, "Do you know anything about the French & Indian War? It's part of Lady Emma's homework assignment for this evening."
Do birds know how to fly? Do cheetahs know how to run fast? Here was a hanging curveball just waiting to be belted into the grandstands for a home run.
"Why yes," said I, "I happen to know a little bit about the F&I War."
I knew that my response was going to put me in charge of homework this evening, but this time I didn't care, in fact, I wanted to help. So Lady Emma sat down at the kitchen table and I got out a place mat so that we'd have a firm writing surface and not scratch the antique pine table. The mat also happened to have a map of the world on it.
So I took a look at the homework assignment and discovered that it had nothing to do with the French & Indian War, well at least not directly. The topic was merchantilism and the trade triangle between Britain, the American Colonies and the West Indies or Africa. Lady Emma had to determine whether certain historical events benefited the Colonies or Great Britain. Easy enough.
For a warm up exercise, I had Lady Emma point out geographic places: Britain, the Colonies, Mexico, Africa, China and the Indies. I wanted to make sure that she had the geography down pat. Then I went to the pantry and hauled out a bottle of molasses, a bag of sugar, some cotton balls from the medicine cabinet and a cloth table napkin. I had Lady Emma identify where each of these items might have come from. She didn't get many of them correct, but we quickly reviewed how sugar and molasses originated from the West Indies, cotton from the Southern Colonies, and cloth, buttons and nails came from Britain.
I then told her to imagine that we owned a farm in Pennsylvania (where my ancestors came from) and we were growing corn and raising sheep for wool. Our cousins in Virginia were growing tobacco and my other cousins were merchants living in Boston. We then worked through how the raw materials were harvested or extracted in the New World and sent to the Old World for processing into finished goods. At this point we would move the props (cotton balls, sugar, etc) around the map from the place of export to the destination.
In this manner, Lady Emma began to understand how the flow of trade occurred during the 18th Century. Most of the homework assignment covered the trade triangle and the Navigation Acts and various other tax acts imposed on the Colonies by Britain. Lady Emma then asked me,
"Dad, why do I have to buy rum and molasses from Britain when I can buy it directly from the West Indies?"
I was so proud to see the light bulb turn on inside her head. She was able to understand why the American Colonies were so upset with British trade policy and how that could lead to ill feelings for the Mother Country, which eventually manifested itself in the American Revolution. I think that I just might make a good history teacher.
As a sideline, we briefly covered the age old dispute between England and France and how it was naturally transported across the pond to Canada and the Colonies. Lady Emma began to see how valuable the colonies were to France and Britain and why they might start a war over control of the North American territories.
OK now, back to painting American Continentals. We have a war to fight.
I trust that in the near future, the homework will actually cover the F&I War, but I am confidant that Lady Emma understands some of the underlying reasons for the war.
v
Posted by Der Alte Fritz at 8:20 PM