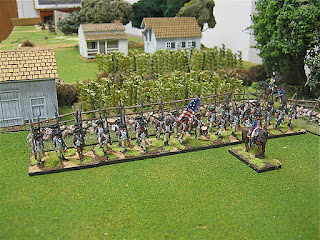 
I have been working on this unit of Fife & Drum Continentals in brown coats for several weeks now. My painting mojo seems to have returned and so I finished the unit over the long Thanksgiving weekend and managed to get them based as well. I think that I like them better than the blue regiment that I painted several months ago. 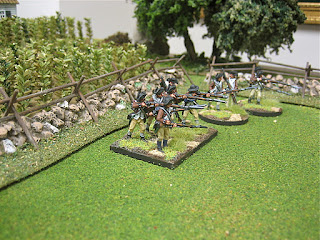 Here is the start of my next AWI regiment - the 1st PA Regt. with green facings and red button lace. The whole regiment will use the Fife & Drum firing poses and mix in a few militia figures for variety. I really like the way these figures all fit together in their poses, as capably demonstrated in this picture.

Saturday evening I sat down at the painting table and tucked into my next regiment of Continentals - the 1st PA in green facings with red button lace. I wanted to use all of the action/firing line figures in the regiment to see how they would look together. This is a little bit of "thinking outside of the box" as these particular figures lend themselves well to skirmish stands (as shown in the round stands in the back ground).

For this unit, I set the figures closer to the back of the stand so that a minimal amount of the musket or bayonet is extending over the front edge of the stand. I always find that having all of the firing figures pointing off in at least a 30-degree angle prevents them from poking the stand in front of them in the rear, should you chose to form them into a march column. Just for grins, I added a militia man wearing a brimmed hat to this stand to add some extra variety to the poses. I am really excited about how good this stand looks and will be eager to finish the unit by the end of this week. I am painting six figures at a time (one stand) from start to finish, rather than going my normal "assembly line" routine for all 30 figures. 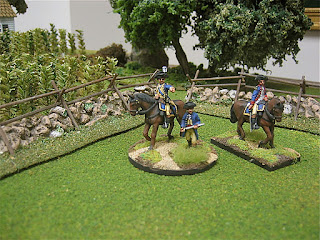 Fife & Drum mounted officers and standing militia officer painted as a Continental. Fencing, corn field and trees were made by Herb Gundt of H.G. Walls.


And finally, I got around to basing some of the general figures that I painted several months ago, as shown above. The brigadier general is on the round stand and the regimental commander is on the rectangular stand. I added the Fife & Drum militia officer to the brigadier's stand for composition purposes. It looks as if the mounted general is pointing to something in the distance and the dismounted figure is looking in the same direction. In the near future (i.e. probably during 2012) I plan to add personality figures for both British and Americans as well as a couple new horses.
Posted by Der Alte Fritz at 1:01 AM