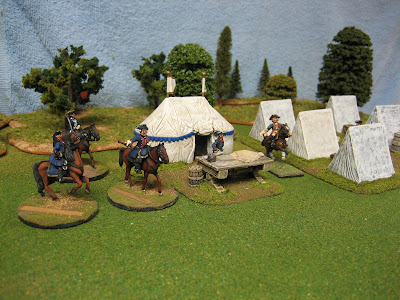 Der Alte Fritz and his staff commence preparations for the next Big Battalion Game.


One of my readers had the impression that Der Alte Fritz's annual Big Battalion Game was a private affair, and I wanted to make it clear that the game is open to anyone who would like to attend. All you have to do is drop me a message, either in the "comments" box on this site, or via e-mail at the following box: altefritz1740@yahoo.com


The game will be held on Saturday October 10, 2009 in Woodstock, Illinois. I am working on a map with directions for anyone who is interested in attending. Woodstock is a suburb of Chicago, northwest of the city and is about an hour's drive from the northern suburbs and an equal drive from the Milwaukee, WI area. In the past, we have had gamers attend from far and wide, including Nova Scotia in Canada and Minneapolis. So mark your calendar and let me know if you would like to play. This is wargaming as it was meant to be played. 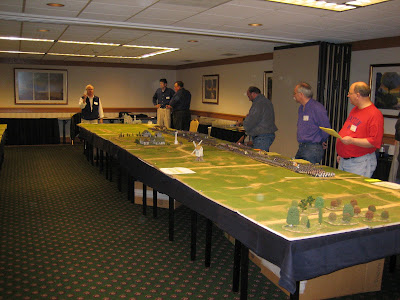 Here is a picture from our second Big Battalion Game - one of two such tables that were 6ft wide by 24 ft long. Now imagine playing this same game on three such tables as shown above. That means lots of flank space and even more depth. Wowzers!

I was a bit of a slacker this month, only logging 76 Olley Painting Points for the month of August (compared to 102 points in July and a rediculous 252 points in June). This month's production included 12 Minden Austrian cuirasseirs (2 pts each or 24pts total), 20 Suren SYW British Guards, 2 Elite Miniatures SYW British, 6 old Elite 1806 Napoleonics, and 24 new Elite 1806 Napoleonics. I had to complete my fourth battalion (72 figures) of French for further play testing of our Napoleonic rules.

I will probably try to cut back the production and keep the painting points closer to my goal of 70 points per month. In fact, I have exceeded this amount each month, averaging well over 100 points per month. It is time for a little more balance in life.
Posted by Der Alte Fritz at 7:20 PM