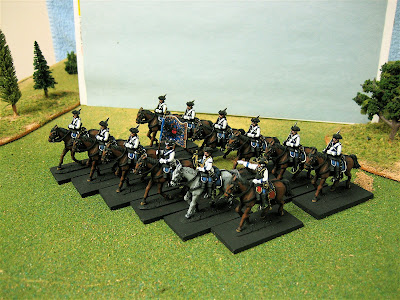 Minden Austrian Cuirassiers and infantry officer painted as the Alt Modena Regiment (click all pictures to enlarge the view).


I have been working on a 12-figure squadron of Minden Miniatures Austrian Cuirassiers for the Seven Years War over the past week and I thought that everyone would want to see the early pictures, even though I haven't had time to terrain the bases. I chose the Alt Modena regiment because it is the only one to sport blue facings. Every other Austrian cuirassier regiment had red facings. My copy of the Albertina Manuscript drawings indicates that the officers in the regiment had red shabraques while the rank and file had blue shabraques.

The regiment's "inhaber" was Franz III d'Este, the Duke of Modena, which was one of the Habsburg's Italian possessions. Christopher Duffy notes that the regiment fought at Kolin, participated in Hadik's raid on Berlin, and was distinguished at Maxen. It also fought at Landeshut and Liegnitz. The rank and file came largely from Moravia (54%) and Bohemia (24%) and its losses were about 10% of the regiment throughout the war. This was far below the average for Austrian cavalry. Duffy also notes that most of the regiment's losses reflected desertions rather than outright casualties. 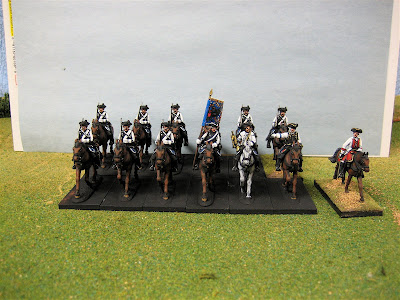 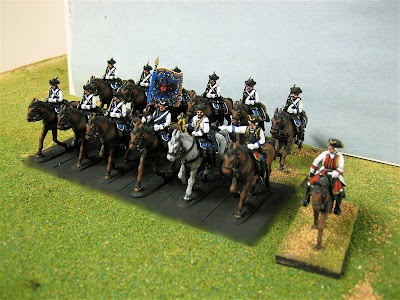 A couple of frontal views of the squadron plus a Minden Austrian infantry officer riding on the flank of the squadron. The flag is from Vaubanner Graphics.
w 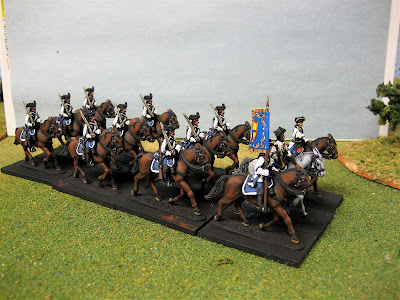 A side shot of the squadron in a column formation, shows off the beauty of the Minden horses, as well as that fine trooper castings.


Eventually the regiment will have 60 riders or five squadrons. I tend to paint cavalry in groups of twelve figures, which happens to be the size of my squadrons using the BAR rules for the SYW. I have to say that these figures are a joy to paint and they are probably the easiest cavalry figures that I have ever painted. The castings are clean and smooth so the brush just glides over the surface. Furthermore, the absence of extra equipment such as fodder bags, dead rabbits and pots and pans means that they paint a little bit faster (since one does not have to paint all of the extra kit that would have been left behind at the baggage wagon park anyway).


I didn't paint the details on the shabraque for this unit. The pistol housings would have a white Austrian double eagle while the saddle cloth would have the "MT" royal cypher in lower left corner. The white edging would have some blue wavy lines. While some people are good at painting such details, I am not and I find that it tends to clutter the appearance of the figure, so I often pick the prodominant color of the shabraque and its edging and just use those colors.

I will probably start on the second squadron tomorrow and work on it over the weekend.
Posted by Der Alte Fritz at 8:10 PM