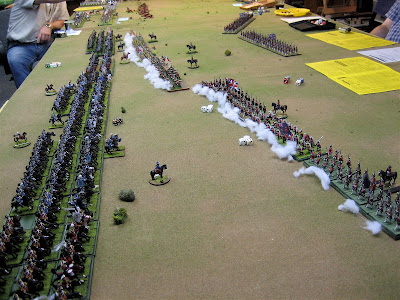 The second wave of French cavalry charges across the Minden heath where a thin red line of British and Brown Bess await them.


Today is the 250th anniversary of the Battle of Minden, fought in 1759 by the French army of Marshal Contades and the allied army of British, Hanoverian, Hessian and Prussian soldiers under the command of Prince Ferdinand of Brunswick. We stage our refight of the battle in Brown Deer, Wisconsin using our "Batailles de l'Ancien Regime (or BAR) " rules. It has been a long day and I must retire to bed for the evening, but I will post more pictures and a battle report tomorrow. Who won? You will have to come back tomorrow for the answer. 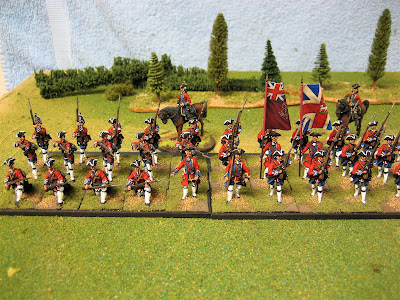 Close up picture of the new addition to my British army: the 1st Regiment of Foot Guards with Suren figures and GMB Designs flags. 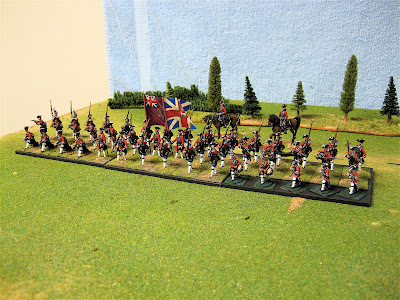 A longer view of the regiment so far: 45 figures including 5 RSM figures that I had to borrow for today's game. The RSM figures are the ones on the plain green, unterrained bases.

I had a late surge in painting production towards the latter part of this week as I wanted to finish of the 14 partially painted Suren figures and build the Foot Guards up to a viable number of figures for use in our Minden game. I ended up with 40 Surens and then I recruited 5 RSM British figures that I had painted for the Guards in an earlier project. I was desperate so I plunked them down on the base. Eventually, this unit will have 60 center company figures plus 12 grenadiers for a total of 72 figures.

I finished the month with 102 Olley Painting Points: 19 mounted figures (2 points each), 63 foot (1 point each) and one cannon (1 point). Included in that total were 8 Suren Black Watch that were partially painted and finished off on thursday night. I don't count a figure as painted unless it is completed in that month. So sometimes, I have a few figures that are "almost done" but they don't get tallied until they are finished.