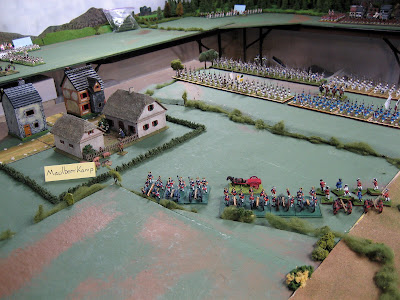 Muhlbeerkamp was actually in the centre of the French battle line, which was really more of an "L-Shape" line, with Muhlbeerkamp being the angle. However, for our battle, it represented the French right (Allied left). Here you see one of the French grand batteries deployed such that it could fire into the left flank of the British advance.

Please click on all pictures to enlarge the view. 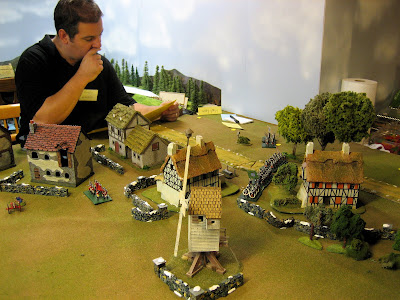 The village of Hahlen anchored the French left (Allied right). Anhalt's piquets of Hanoverian and Brunswick troops contested the town and captured it from Guerchy's French. 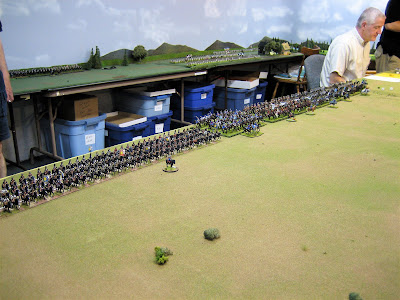 The first wave of some 2,000 French cavalry are startled to see 8 battalions of redcoats marching straight towards them. Since they had no small arms to defend themselves, they had to rely on the "arme blanche", the sword, and thus had no choice but to retire or charge. So charge it was. The first line of French cavalry included the Mestre de Camp and Royal Cravattes, 11 squadrons in all. 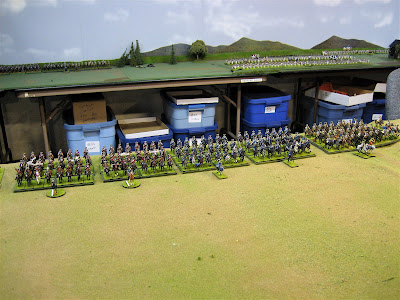 More French cavalry - I can't recall whether this was part of the first line or the second line. These are mostly Elite Miniatures French from the collection of Bill Protz. 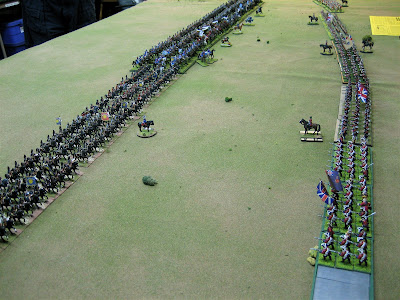 The onrush of the French cavalry. Sporken's brigade stopped and prepared to receive them. Every round would have to tell. 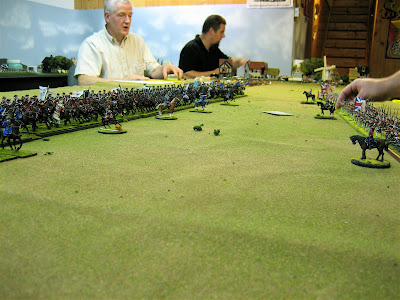 The French cavalry close in on Sporken's brigade. "Steady lads, wait for the order". 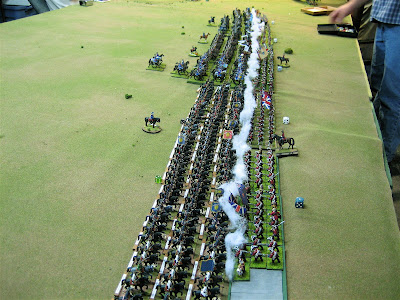 "Ready, Present, Fire! ", barked the British officers. The first wave was smashed and many empty saddles returned to the French lines. 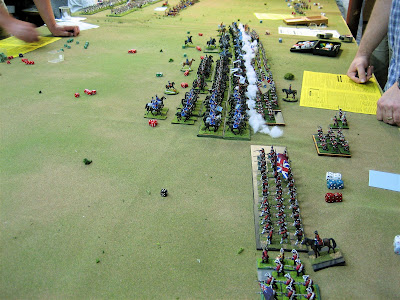 The French are repulsed and their right hand squadrons recoil from the hail of bullets unleashed by the thin red line. 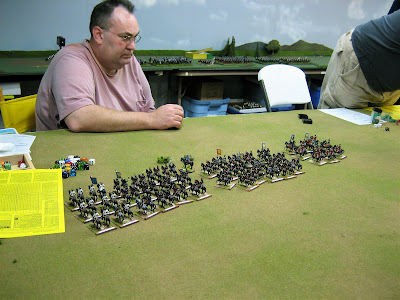 Le Duc de Fitzjames does not look pleased as his cavalry returns to their own lines (these are mostly RSM figures from Der Alte Fritz's collection used in his conventional games at 1:30, but the frontages of the stands are the same as in BAR, so we were able to use these units in our game. One regiment of 12 figures (360 men) became one squadron (120 men) in BAR), 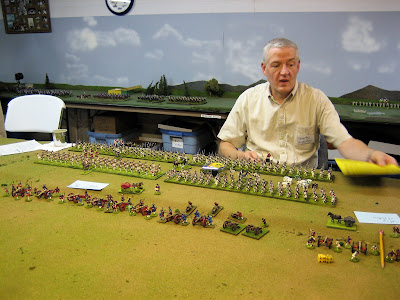 Guerchy/Lusace's brigades on the French left near Hahlen form an impressive grand battery of artillery that whittled down the right flank of Sporken's brigades as they advanced against the French cavalry.


Our refight of the battle of Minden on Saturday August 1, 2009 was really two different battles. The first battle was an historical simulation of the attack of the French cavalry against Sporken's brigade of British and Hanoverian soldiers. Host Bill Protz, staged the whole game and served as a sort of "director" of the film. We would move troops across the table and Bill would halt the game briefly and have us move certain units to other positions so as to recreate the battle as closely as possible. For example, when it became apparent that the French artillery were killing off too many British figures, he allowed us to replace some of our casualties. When the French cavalry attacked and engaged the British foot in melee, he would direct the French players to retire back to their lines if they did not win the round of melee. We only fought one round of cavalry versus infantry melee during this phase.

Later, after the three waves of French cavalry attacked and were repulsed, we converted over to a conventional wargame and let the dice and the cards decide the outcome. The British infantry won the simulation phase, while the French won the wargame part of the game. More on that tomorrow in part II of this report.
Posted by Der Alte Fritz at 11:58 PM