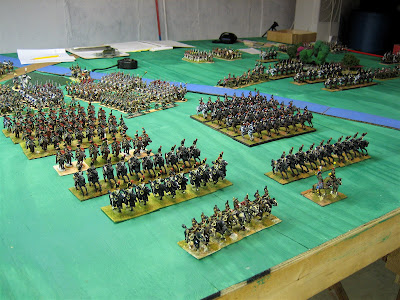 Marshal Murate (right) leads the flower of the French Guard cavalry against the Russians today. (click picture to enlarge the view)


I thought that I would post a teaser of some of the photos that I took at the massive In The Grand Manner Napoleonic game that we played today at Chez Leidy. This is a continuation of the game that we started back in May and continued into July and August. This was our fourth full day of wargaming this scenario.

We played 24 turns over the previous three game sessions, which meant that night had fallen and everyone had to fall back to their lines in order to refit and get ready to resume the battle in the morning. Both sides were allowed to reposition and redeploy troops within 36" of their final position, the day before. Artillery was resupplied , as were all muskets.

I will post many more pictures on Sunday afternoon and give an account of Marshal Murat's great cavalry charge into the teeth of the Russian batteries. It was somewhat reminiscent of the great charge at Eylau, but today the French cavalry wiped out two Russian batteries, while a third horse battery was decrewed with counter-battery fire.