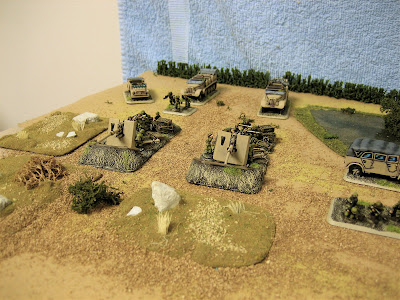 DAK battery of 88s, painted by Alex Akers. Click all pix to enlarge.

The Western Desert of North Afrika, circa January 1942, has attracted my attention of late and I have apparently caught the Flames of War bug. This will hopefully be nothing more than a passing fancy as I only intend to have a small division of Deutsche Afrika Korps troops for the FoW game system. My regular gaming group in Milwaukee plays FoW three or four times a year and Bill's accounts of zooming across the sands in his little British tanks sounded interesting. With that in mind, I bought a panzergrenadier box o' figures, some 88s, a few tanks, mortars and machine gun platoons, and some paints and...

I decided that I didn't know a thing about WW2 nor did I have a particular desire to paint any of this stuff. So I did what any self respecting wargamer would do. I sent the whole lot off to a professional painter. It wasn't just any old painter, it was was my nephew Alex (aka "the Heir Apparent" according to Herb Gundt). 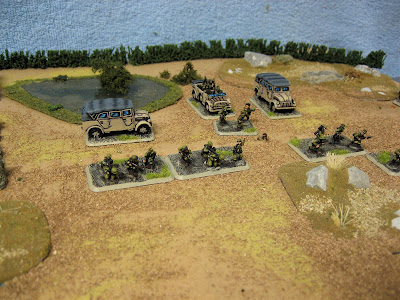 A platoon of panzergrenadiers with their supporting vehicles. Painted by Alex Akers.

I thought that the lad did a very nice job of painting the vehicles and the 15mm figures. He also based everything for me. The smaller 15mm figures are a bit harder to photograph and so my pictures probably don't pay justice to Alex's painting skills. He does a lot of Games Workshop figures and enters them into competitions, garnering some awards here and there. I also sent him a few sample 28mm Napoleonics for him to play around with so I can see how he does. I intend to let him help me build up my 1806 Napoleonic collection.

Alex is interested in garnering a few painting commissions, so if you are interested in having some work done, contact him at: alexanderakers@yahoo.com for more information. Alex accepts PayPal to make things easier for you.

So eventually I will have three platoons of panzergrenadiers, one heavy machine gun platoon, one heavy mortar platoon, an anti-tank platoon, the wonderful 88s, and probably a platoon of Panzer III-J tanks. I plan to let the rest of the group supply all of the other allies as well as the British and American opposition. 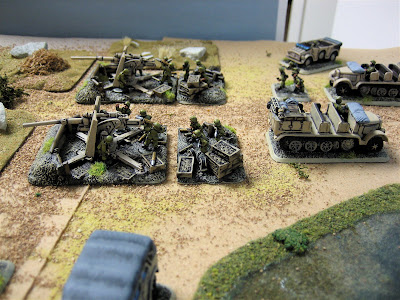 A closer view of the 88s and their support vehicles, by Alex Akers.
Posted by Der Alte Fritz at 9:48 PM