I don't often comment on events outside of the realm of wargaming, but I have to make an exception today in honor of the feat that Chicago White Sox pitcher Mark Buehrle accomplished today. He did what only 17 other baseball pitchers have done in the entire history of major league baseball -- he pitched a perfect game. That's 27 batters going to the plate, and 27 batters making outs. It is a rarity in baseball with the last perfect game being thrown four or five years ago by Randy Johnson. Buehrle is no stranger to perfection though, for in 2007 he hurled a no-hitter against the Texas Rangers and nearly had a perfect game then. One batter, Sammy Sosa, drew a base on balls and was promptly picked off of first base for the out. Mark faced the minimum 27 batters in that game too. 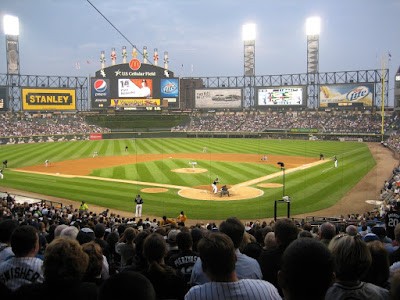 Der Alte Fritz was at US Cellular Field last evening for the White Sox 4-3 win over the Tampa Bay Rays. He missed Buehrle's pitching gem by one day. Click to enlarge.

I've never seen a no hitter in person, but I have seen several via television. Coincidentally, I along with Mrs. Fritz and Lady Emma Cuddlestone-Smyth went to the Sox game last evening and watched our beloved baseball team post a come from behind 4-3 win over the same Tampa Bay Rays. Lady Emma has become quite the Sox fan and I've successfully converted Mrs. Fritz from a Cubs fan into a Sox fan. She says that the Sox have more personality and characters than the Cubs. Lady Emma's favorite player is outfielder Jermaine Dye. 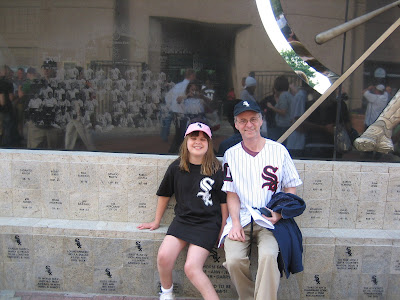 Lady Emma and DAF himself pose for pictures outside of the ball park last night.

At any rate, last night's game was really exciting and I didn't think that anything could top that game, but I was wrong. The Sox and Rays played a day game today, starting around 1PM so I would have to miss it since I was at work. Around 2PM, I happened to check in on a web site that carried an inning by inning game summary, not in real time. It was the fourth inning and I was happy to see that the Sox were winning 4-0. I also noticed that Tampa did not have any hits. "hmm", thought I, "maybe Buehrhe will pitch another no hitter today."

I went back to work and made a brief check of the box score every ten or fifteen minutes. That is when I told a couple of coworkers (and my boss, who is also a big White Sox fan) that a no hitter was in progress. It killed me that I couldn't watch the game and we didn't have a radio on hand, and the web doesn't carry live streams for security reasons. Soon the 7th inning passed with no hits for the Rays. Everyone in the office was starting to check the internet to keep up on Buehrle's progress. The 8th inning came and went without any base hits or walks for the visitors. Now the excitement was at full pitch. Only three more batters to go!

I called Mrs. Fritz to tell her what was going on. She was in the car driving Lady Emma to a couple of doctors' appointments so they listened to the last inning on the car radio. The internet feed that I had was delayed, but I could see that it was down to the last batter. Then Mrs. Fritz called me back to tell me that Buehrle had done it. Little did I know how close a call it had truly been. The first batter in the 9th inning hit a screaming line drive that would have been a home run, but centerfielder DeWayne Wise made a spectacular leaping catch to preserve the perfect game.

I later was able to watch a replay of the whole game on the local cable channel, and watched that catch over and over. What a miracle. What fun. So I tip my cap to Mark Buehrle and the rest of the Chicago White Sox for a game well played. 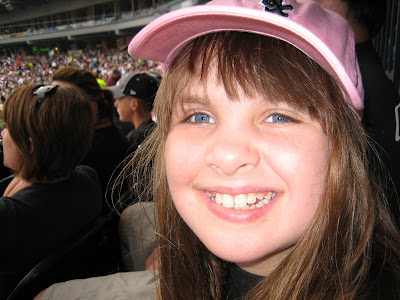 Lady Emma had a grand time cheering on her White Sox at last night's game.

It looks like we are going to have a rockin' and rollin' time at the old baseball yard for the rest of the summer. We've been to two games this year, both behind home plate, and our record is 2-0 in terms of wins. I guess that we had better go to a few more games to cheer our team on to the division title and the playoffs.
Posted by Der Alte Fritz at 11:09 PM