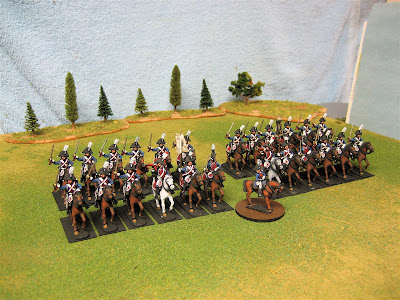 Last weekend Bill P. visited Schloss Seewald so that we could run our first play test of the BAR variant rules for Napoleonic warfare at a 1 to 10 ratio. Bill had all of the quick reference play sheets printed and ready to go while I supplied the troops and the terrain. Sorry, but no pictures were taken of the play test so you will have to wait until our first official BAR Napoleon game next saturday July 18th.

Bill played the French (of course) and Der Alte Fritz commanded the Prussians (ditto) and we set out a few units (3 French battalions, 4 artillery pieces, clouds of skirmishers and a 100 or so cavalry) for the French and a similar number for the Prussians (4 battalions, 2 foot artillery, 2 horse artillery, 36 dragoons and 36 cuirassiers). It was set up as an informal meeting engagement with both sides vying for control of a small town.

The outcome didn't matter much as we were more interested in seeing how certain aspects of the rules worked out. The infantry and artillery were no problem as these elements functioned pretty much as they did during the SYW. So no changes were needed there. We did tweak the skirmish rules a bit. Instead of consulting the firing tables, one now merely rolls a D6 for each skirmisher figure and hits with a roll of 4, 5 or 6 depending on the range to the target. This adds more dice rolling and creates some fun situations. Sometimes your skirmishers will hit everything they shoot at, while at other times, they couldn't hit the proverbial broad side of a barn with there target practice.

The cavalry vs cavalry melees went off without a hitch too. Since Napoleonic cavalry fought in two ranks, instead of three, we limited melees to two ranks deep. This worked ok with the cavalry, but when they faced off against the infantry, we decided that having three ranks of infantry fighting against only two ranks of cavalry was unfair, unrealistic, and resulted in a huge advantage for the infantry.

I want the players to have incentives to use Napoleonic tactics, so I think that we need to severely modify the cavalry versus melee rules so that the horsies have a big advantage once they close with the infantry. For starters, I plan to add a +5 melee bonus to cavalry vs infantry not in line, and then see what happens. There will be a few other changes as well, but I want the infantry commander to feel the need to form a square in the presence of enemy cavalry. And right now, there is no need to do so without more modifications. We shall see how things turn out on Saturday.

I have been working on more Elite Miniatures French chasseurs a cheval this week, building the 12e Chasseurs from 12 to 24 figures. This was a welcome change after spending the past two weeks tediously painting French line infantry.

That's the update for now, more later in the week.
Posted by Der Alte Fritz at 12:55 AM