Restoring Order To The Universe 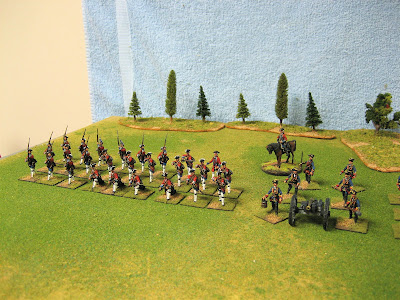 This is a reminder that the 18th Century and the Seven Years War in particular are my primary interest when it comes to wargaming and historical research. I think that the recent pictures of that remote and unpopular period known as WW2 created a disturbance in The Force, one that I must fix ASAP. Accordingly, I am posting a picture of my Suren British Guards battalion for all to view. A healthy dose of tricorn pictures should restore balance to The Force.

On August 1, 2009 we are going to recreate the Battle of Minden in order to celebrate the 250th anniversary of the sound whuppin' that His Britannic Majesty's Army in Western Germany (and allies from Hanover, Hesse Kassel and Brunswick) administered to the French army. So after our BAR Napoleonic play test on July 18th, my plan is to switch back to tricorns and finish my battalion of British Guards. I have 27 completed and will need to top them up to around 60 to 72 figures.

And yes, I know that the Guards were not at Minden, but because Monsieur Chevert does not want to trot all of his fine cavalry up to the muzzles of the British brigade and get shot out of the saddle (the cowards), he intends to alter the scenario somewhat. That being the case, says I, why not allow the British Guards to appear at Minden? Why not indeed? And so it goes.

After the Minden game, my next unit in the painting que is three to five squadrons of Minden Miniatures SYW Austrian Cuirassiers. That won't make Frederick very happy, since he has to face them, but I want to have this unit ready for our annual Old School Big Battalion wargame in October and I absolutely love painting Minden figures.
Posted by Der Alte Fritz at 10:56 PM