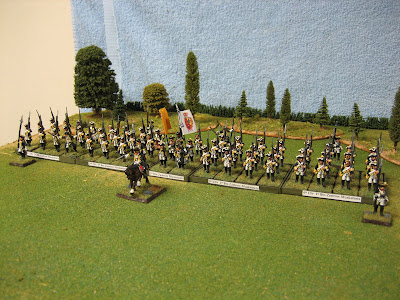 Brunswick regiment Von Zastrow on parade. Foundry figures from the collection of Dennis Smail. This collection is merely passing through Hesse Seewald and on its way to a new home.

One year ago today I started Der Alte Fritz Journal as a place where I could talk about the wargaming hobby, post a few pictures from time to time, and keep a few friends up to date on my on going feud with Gallia. I must admit that I had a little bit of fear and trepedation. Afterall, how would I find enough things to blog about every week of the year?

I guess that my fears were unfounded, for I have posted 112 entries over the past year, or approximately one new posting every three days. Topics have ranged from the current SYW units on my painting table, pictures of my various wargame collections, new products that I had discovered, after action wargame and convention reports, and last but not least, the ever popular Teddy Bear Wars.

A Few Statistics
Just off the top of my head, I would imagine that the most popular postings have been the Teddy Bear Wars, the Jacobite Rebellion, anything having to do with Napoleonics, and my latest additions to my Seven Years War armies. Case in point, the average number of visits per day is around 175, but whenever I have posted Teddy Bear Wars reports, this zooms up to nearly 500 visits. Some of the Jacobite Rebellion and the In The Grand Manner Napoleonics reports have also logged nearly 500 visitors. Typically, a new pictorial posting will attract somewhere in the neighborhood of 300 visits.

As of this evening, there had been 63,900 hits on this blog over the past twelve months, which is far more than I ever would have imagined when I began this endeavor. So a big "thank you" to everyone who has paid me a visit. Your feedback and comments are very much appreciated and make this endeavor a lot of fun for me.

The Brunswick Brigade
I have graced the top of this page with a picture of one of the units that my friend Dennis Smail painted for Batailles de l'Ancien Regime (or "BAR", as it is popularly known). Dennis had been out of wargaming for a number of years, but the Alte Fritz Journal stirred up his interest in the Seven Years War and games played with the BAR rules. He didn't want paint Prussians, exactly, but was looking for something similar. So he settled on the army of the Duchy of Brunswick.

I rather like the way that Dennis organized his battalions. Note that each grand division (or stand) has an extra officer, NCO or other file closer that he places in front of the grand division as it marches across the table top. Then, as the unit prepares to engage in musketry, he places the file closers behind the battalion, just as they would have done in real life. I think that this is a rather nifty way of organizing a BAR battalion, and it kind of harks back to the organization used in Peter Young's Charge book. 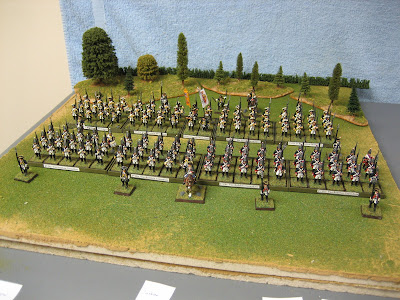 The Brunswickers are currently passing through the Duchy of Hesse Seewald, where they paused to have their pictures taken. They are soon to pass into service of another imagi-nation in the vacinity and I look forward to seeing them in some of our future battles in Brown Deer, WI. The brigade consists of two musketeer battalions and two grenadier battalions. The whole Brunswick army had eight battalions, as I recall, and Dennis had painted four of them. They consist largely of Foundry and Crusader castings and look rather splendid.