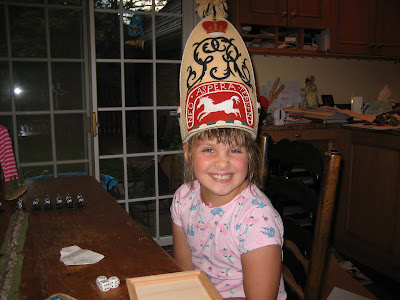 Lady Emma Cuddleston-Smythe models a grenadier mitre of one of her regiments.

My daughter asked me to break out the Eureka Teddy Bear armies from storage and set up a little wargame after dinner this evening. As before (see entry dated December 27, 2007), she assumed the role of Lady Emma Cuddleston-Smythe and commanded the pink army, while Der Alte Daddy assumed the guise of Lord Paddington Bear of the blue army.

This time, the battle was set in colonial Virginia, atop the kitchen table. The terrain was built by Herb Gundt (not of the Gundt Bear family) and the table top was provided by some unknown craftsman in 19th Century Normandy. The fine patina of the table seems to be perfect for hosting our Bear Wars. Today's battle was known as The Battle of Bear Hollow. Lord Paddington Bear's Blue Army was defending the local Bear Hollow Candy Shop. His objective was to keep all of the store candy out of the hands of the pink army. 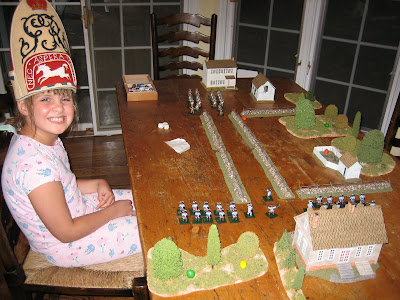 The game layout showing the Bear Hollow Candy Store at the bottom of the picture and the town of Bear Hollow at the top of the table. Der Alte Daddy's Blue Army is shown in battle array defending the candy store, while Lady Emma gleefully contemplates capturing all of the honey pots (M&M's).

Lady Emma commanded the Pink Army and her objective was to capture the Bear Hollow Candy Store and to pick up as many honey pots (Almond M&M's) as she could find. The honey pots were hidden (not very well) all over the table top and one of the victory objectives was to capture more honey pots than the opposing army. As before, the rules were made up on the spur of the moment. Movement rates were walking (2 x D6) and running (3 x D6) with the proviso that a running unit may not fire. A walking unit may move and fire.

No bears were hurt in the filming of this battle. All bear casualties were simply conked on the noggin with cork guns and sent to the hospital where they recovered nicely. 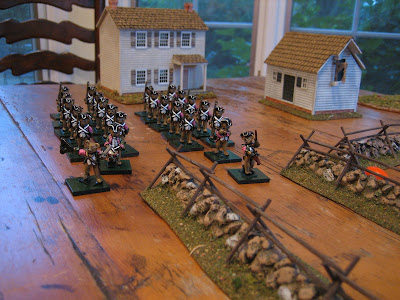 We rolled D6 dice to determine the initiative and Lady Emma's army earned the first advance, picking up a couple of honey pots by the side of the road as well as in the woods. She sent one regiment of bears along the road to her right, while sending the second regiment off to the left flank and into the woods, where there appeared to be an abundance of riches (honey pots). 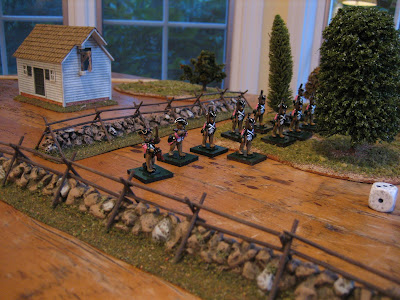 The 2nd Pink Bear Regiment enters the woods on the left in open order.

Lady Emma Cuddleston-Smythe quickly figured out the value of collecting the honey pots. Afterall, the victor gets to eat all of the spoils at the end of the game. I also taught her some of the rudiments of warfare, such as the value of turning the opponent's flank. Her advance through the woods quickly outflanked my righthand regiment, which had to fall back towards the Candy Store.
t 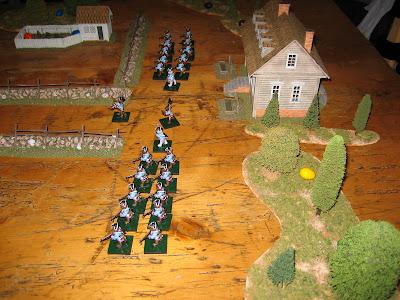 A view of Der Alte Daddy's Blue Army defenses around the Candy Store.

My plan was to advance forward and try to capture the honey pots that were inside the little hen house shown above. 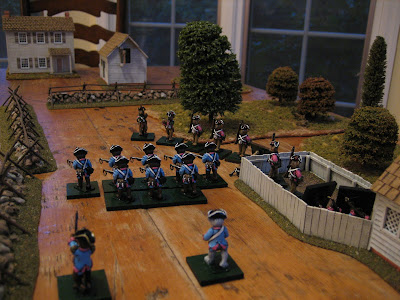 The 2nd Pink Regiment captures the Hen House and outflanks the Blue Army, which has to fall back.

The dice gods were kind to Lady Emma, and she started mowing down my Blue Bears in short order. I had some good saving throughs on the left side of the table, but my luck was not very good in the tense battle for the Hen House, which Lady Emma captured. 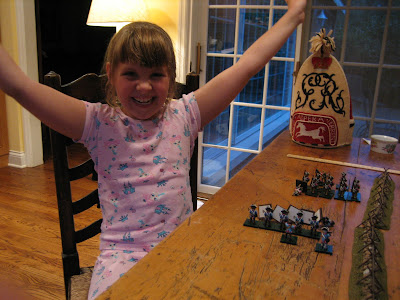 Lady Emma talks some smack with Der Alte Daddy after her 1st Pink Regiment mows down my unfortunate 1st Blue Regiment. Ouch! Off to the hospital they go!

Things were not going much better on the other side of the table. In one volley, I lost 5 of my Blue Bears to only one of the Pink Bears. I decided to bug out and run back towards the Candy Store and scoop up some honey pots along the way. 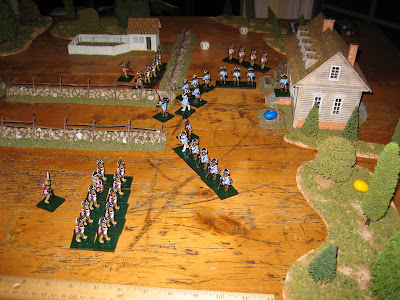 The last stand of the Blue Army in front of the Candy Shop.

The above picture shows Lady Emma's Pink Army closing in on the Candy Shop from both sides. On the final turn, she decided to have part of the 1st Pink Regiment (shown at the bottom of the picture above) run for the honey pots while the other half remained in the firing line to shoot at my blue bears. Nice move Lady Emma! 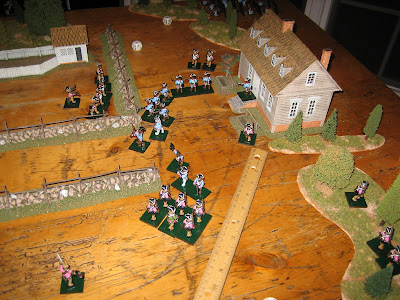 Those clever Pink Bears go for the honey pots on the last turn. 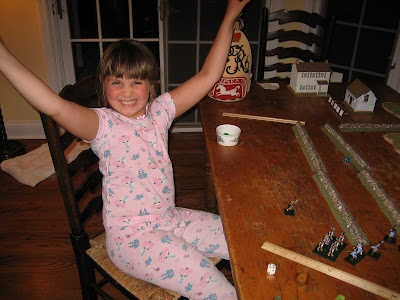 The winner! "Daddy, this is toooo easy!" said Lady Emma

The game ended with the Pink Army knocking out 11 Blue Bears to only 5 Pink Bears and capturing the Bear Hollow Candy Store. In addition, Lady Emma also captured 12 honey pots to a mere 2 captured by the Blue Army. It was a complete and utter rout of Lord Paddington Bear's Blue Army and I am sure that the history books will have many words about the famous Battle of Bear Hollow and Lady Emma's great victory.
Posted by Der Alte Fritz at 11:48 PM