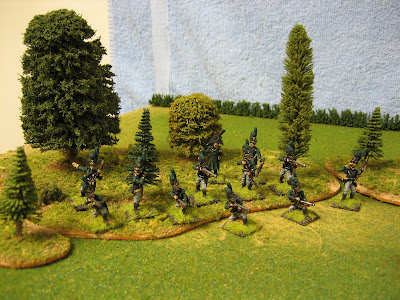 Baden Jagers, circa 1806, from Pontonnier Miniatures patrol the woods. Trees from K&M.

Last week I reported on the progress that I was making on the Baden Jagers that I purchased from Pontoonier Miniatures at this year's Historicon convention and promised to post some pictures. So here they are. The picture above depicts the contents of three boxes of 4 figures. The command box is "NBD16" Jager Battalion Command and includes four figures (officer in great coat, a musician with a horn, and two NCOs waving and pointing their arms). The other box is "NBD18" Jagers Skirmishing and also contains four figures (one each of standing loading, standing firing, kneeling loading and kneeling firing). So it appears that you can "pair up" your jagers so that one is firing and one is loading, both in kneeling and standing poses.

I don't recall the prices per box, but the figure of $10.00 per box of four seems to stick in my memory, but don't quote me on that as I can't accurately state the price. The figures appear to be compatible with Elite Miniatures in terms of size and sculpting style. They have a thin appearance which gives them a look of realism, so I really like the Baden Jagers. The line infantry are even nicer, but I have not had the opportunity to paint any of them yet.

Here are some close up shots: 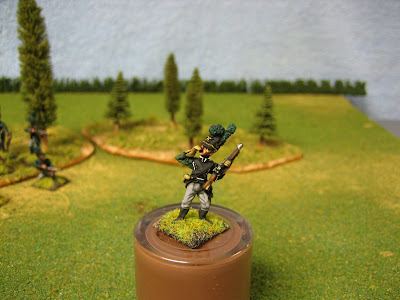 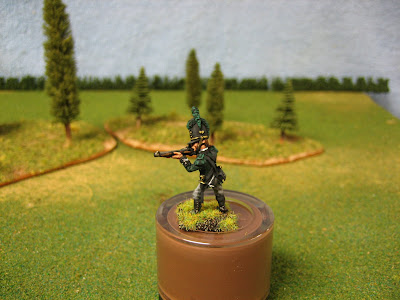 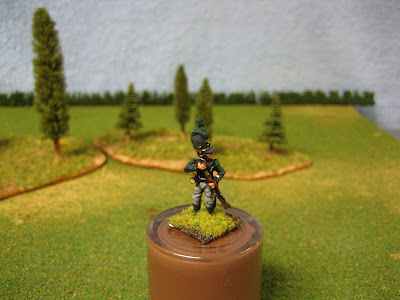 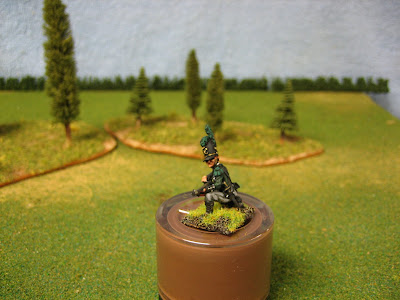 My overall impression of this new range of figures is highly favorable. The detail is very good and it is easy to pick out things such as buttons, cartouche emblems and the detail on the helmets. As stated earlier, their proportions are such that they look like real people in miniature and they are designed to use with Elite Miniature. The faces are nicely rendered, so in this they differ from the Elite (which go for a more "impressionist" look to them).

I am looking forward to having some time to tackle the battalion of line infantry that I also bought at Historicon. When I spoke to the proprietors of the company at Historicon, they indicated that they would focus on the various German Confederation nations that were allied to the French during the Napoleonic Wars. I look forward to seeing more products from this company, especially the Baden light cavalry and artillery.
Posted by Der Alte Fritz at 12:38 AM