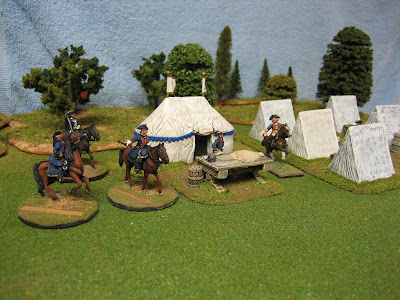 Der Alte Fritz and his staff (from left to right: von Driessen, von Saldern, the portly Duke of Bevern, der Alte Himself, and his aide de camp von Katte) make preparations for the coming battle that will decide the fate of Europa.


The annual Old School Big Battalion game is fast approaching and der Alte Fritz is scurrying around getting things ready for this gala bash. The game will be played on October 11, 2008 at the Marriott Lincolnshire Resort in the suburbs of Chicago (Lincolnshire, Illinois).

The game preparations include such things as the scenario design, the recruiting of forces for the Gallian (French) and Germanian (Prussian) armies, terrain work, food (lunch and afternoon tea & coffee with snack), et cetera, et cetera. I am also finishing off a few figures for a couple of new units or building up the numbers of existing units for the coming battle. I am also working on (drum roll please) "the secret unit".

I can not reveal the identity of "the secret unit" just yet because the Gallian Colonel Enigma and his band of spies often lurk around the fringes of these parts. I can report that there is much concern and consternation inside the Gallian camp over the possible identity of (everyone, all together now "the secret unit"). Now it is entirely possible that this is nothing but some disinformation designed to discombobulate the Gallian camp. Or is it? Bwhahahaha!!!! 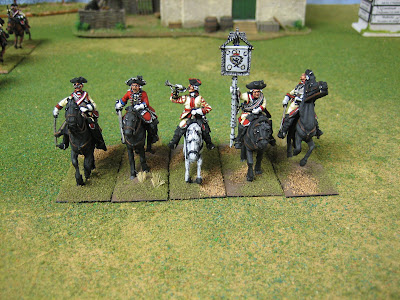 A not-so-secret-unit: CR13 Garde du Corps (standard bearer and red coated officer are from Foundry, the other figures are from Elite Miniatures).

Over the past few months I did add some more squadrons to the Prussian Garde du Corps, bringing them up to 45 figures organized into three squadrons of 15 figures each. They won their first battle honour at the battle of Der Rieterbrucke earlier in the year, when the captured the flags and kettledrums of the Saxon Rutowsky cheveau-legers. They won a second battle honour at this year's Seven Years War Association convention, which elevated them to "Elite" status in our BAR rules system. This makes them "bad to the bone" tough on the battlefield.

People have been asking me how I paint so fast. I guess that the answer is that (1) I simply enjoy painting and view the hobby as one of "painting" as much as it is of "wargaming", (2) I am motivated by the series of games that our group has at Chez Chevert in Brown Deer, Wisconsin, and (3) I endeavor to paint at least one hour per day. Sometimes things get so busy that I can't paint the requisite one hour per day, but Her Highness deigns to give me Saturday for painting, so often I am able to accomplish great things on the weekends. Basically, slow and steady wins the race. If you paint frequently, but in small batches, you will be amazed at how your painting output increases.

Well, I must get back to the painting table to work on the "you know what". Cheers!

Oh, and thank you everyone for all of the kind comments about this blog. I appreciate the comments that people leave on the web page and I encourage you to leave comments or questions. I always answer questions that readers leave in the comments section, except, of course, the identity of "the secret unit".
Posted by Der Alte Fritz at 7:43 PM