Nothing But A Misfire... 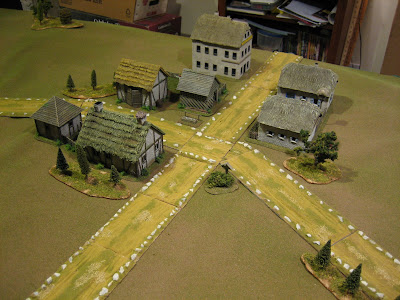 All is quiet in Alsfeld as Bauer's hussars depart for Gruningen.


As the shot rang out, the streets of Alsfeld were filled with pandemonium as the first troop of the Black Hussars scurried for cover. The second troop rode around the perimeter of the town and sealed off the exits from the town, but nary an enemy rider or foot soldier appeared. Gradually Captain von Arnim was able to restore order within the troop and it was ascertained that one of the troopers had dropped his muskatoon, causing it to accidently fire.

Colonel Bauer rode to the edge of town and conferred with von Arnim, listening to his report. Having decided that the town was cleared of hostile forces, the order was issued to encamp around the town for the evening. Von Arnim's squadron proceeded beyond the town (to the southwest) and established a picket line of 60 riders from the first troop of his squadron. The second troop dismounted and set up a road block on the outskirts of the town as a precaution.

The next morning, the task force saddled up and moved down the road towards Ruppertenrod, where they would cross the river Ohm. From there, they continued on towards Grunberg. Where were they heading? To Geissen perhaps, which was thought to be occuppied by Gallian troops, or further south in the direction of Frankfurt?

Campaign Notes
I want to thank everyone for the creative suggestions with regard to the origin of the musket shot. I settled the outcome with a D6 die. A roll of 1-2 was a misfire; 3-4 was a jager hunting in the woods; and a roll of 5-6 meant enemy forces were setting an ambush. Fortunately for Captain von Arnim, I rolled a "1", so it was merely a misfire.

For each day of the campaign, I begin by rolling a D6 die. If the roll is equal to the number of days on campaign or less, then enemy pickets will appear. The appearance of the enemy will trigger another die roll to determine whether it is a force of cavalry (1-2), light infantry (3-4) or both (5-6). Then a further die roll can be used to determine the number of infantry or cavalry units that are spotted. So on Day 1, I rolled a "1" on my D6 and so that set off an action of some type. As it turned out, it was merely a misfire. On the current Day 2, I rolled a "3" so no enemy forces were spotted. Thus Colonel Bauer's task force proceeded to Grunberg without being detected by Gallian pickets.

Things are likely to heat up tomorrow though, as I just rolled a "1" for my Day 3 die roll. Come back tomorrow to find out what Colonel Bauer saw.
Posted by Der Alte Fritz at 12:22 AM