Purconius the Younger Survives the Game of War 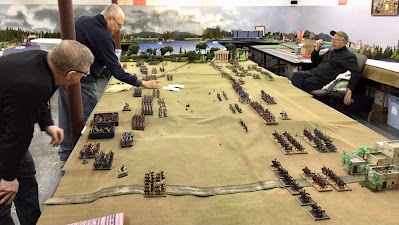 Last weekend I traveled to the home barracks of Major General Augustus Pettygree to engage in the lively sport of war gaming with Ancients figures. We used 28mm figures in our game (not my 54mm figures). We are effectively play testing rules for an Ancients variant of Bill's Batailles dans l'Ancien Regime ("BAR") rules.

We have found that the rules mechanics to work quite well for a number of historical periods outside of the Seven Years War. These include the Jacobite Rebellion of 1745, Napoleonic Era, 19th Century British Colonial era, and now Ancients. Because the elements of movement, combat and morale are the same across all historical periods, the players quickly pick up on how to play the rules.

One of the adaptations learned from play testing is that the missile fire (arrows) were akin to Maxim Machine Guns, so we toned down the effect of arrows, limited saving throws to just a "6" on a D6 die, and making the morale of light troops more brittle. Other changes will undoubtedly occur as we do further play testing. We have to figure out some rules for war elephants.

Let us get on to the games!

The Good Guys featured a team of Republican Romans (Bill) and Late Romans (me) versus the tag team of Successors Greeks (Bob) and early Egyptians (Kurt). I faced off against the Greeks while Bill attempted to handle the Egyptians. At this point of time in the play testing we are doing  "bring what you got" games so that no one has to frantically paint the opposition force of another person's army. Eventually the games will be period correct with armies fighting their historical foes.

My hazy recollection of the battle is that the cavalry of both sides played each other out, with neither side gaining an advantage . Cavalry units were fairly well knackered by the end of the game.
Part II
The infantry battle
My Late Roman Legio troops (chain mail) faced off against several Macedonian phalanxes. Bob had one elite unit as did I. Neither of knew which unit was elite until they closed into action.
The Romans repulsed the Macedonian phalanxes, but at a high cost with over half of their force laying dead on the ground. My elite legio unit legged out of the fight. Surely they will face decimation once the battle is over.
&&&&&&&&&&&&&&&&&&&&&&&
Purconius the Elder had lost the last battle against a roving war band of Germans. There was no news regarding his possible capture or his death on the battle field. It is thought that he is being held for ransom by the Germans, but undoubtedly this will not sit well with the Emperor and the Senate back in Rome.
Thus Purconius the Younger had hoped to restore the family honor by winning a battle, but it remains to be seen whether or not he achieved his goal in this battle. He has already despatched couriers back to Rome with news of a victory over the Macedonians. Tis better to lie like a bulletin than face the uncertainty of failure.
The Republican Roman army of Augustus of Pettygree was annihilated by the Egyptians so undoubtedly the Senate will be more focused on this disaster than they will by the veracity of Purconius the Younger's message of victory.
Posted by Der Alte Fritz at 2:41 PM