The Romans Are Worried

The Romans have been watching the recruiting and training of Hannibal's army with great interest. The Senate has sent Scipio ( he hasn't acquired the name "Africanus" yet) to Hispania to observe the Carthaginian siege of Saguntum. The Senate prepares to declare war on Carthage and start the Second Punic War.

I finished painting 16 Roman Triarii a couple of days ago, adding to the 16 Hastatii that were the first Punic Wars figures in this project that I painted.

I need to find a way to increase this new Triarii unit from 16 to 32 figures. I found another 8 figures from a trading forum, bringing the unit up to 24 figures. The remaining 8 figures that I require will likely have to be conversions using some of the HaT Hastatii figures. I have "converted with paint" one Hastatus figure by painting part of his tunic black and then spotting it with a metallic color to give it the appearance of chain mail. I think that when I mix in the conversions that they will not be noticeable.

Another of my blog followers found two boxes of HaT Triarii and that is enough figures to make a second unit. Thank you my friend.

Raw Roman recruits (say that ten times in a row) line up as they await their new uniforms. These are all Hastatii. 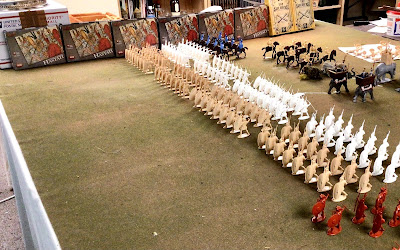 I leave you with several pictures of the John Jenkins Designs Republican Roman Triarii figures. These are actually 60mm figures.