I finished a unit of 32 Celtic/Gaulic warriors to add to Hannibal's army in Italy. These were a little bit daunting to paint, at first, what with all of the plaids and strange shield designs of the Celts. I went to my "go to" uniform source, Pinterest, entered Celtic shields, and found lots of pictures to help me paint the figures. I also looked at painted 28mm figures, found on the internet, which I used as a sort of "how to paid them" tutorial. Usually I can look at a painted figure that I like and figure out how the painter painted this or that.
I also finished a 32-figure unit of Carthaginian Africans (painting an additional 14 figures to top the unit up to 32 figures). You can see both the Africans and the Celts in the picture below.

So at this stage of the Punic Wars Project I have painted 4and one-half units for the Carthaginian army. These include the afore-mentioned Celts, two Iberian units, one African unit, one light infantry unit, a half unit of Balearic Slingers, and a half unit (16 figures) of Carthaginian Veterans. Oh, and I also have three painted elephants and eight Carthaginian cavalry that I picked up on eBay at a decent price.

Currently on the painting table are 16 Roman Hastati figures that will top up my Hastati to 32 figures (which is the size of one unit) These should be completed within the next day or two (I'm retired and the wife is out of town this weekend, so I have the whole house to myself, which equates to more painting time for me).

I'm not keen to start on any of the cavalry (I have 8 Romans and 8 Numidians to paint) because I have to do a lot of filing on the horse so that the rider will seat snuggly onto the horse. The HaT riders are not bow legged enough to fit on their horses. I also have to do a bit of drilling and pinning of figures onto the horses, which is time consuming. I have more elephants than I actual need now, having found the painted ones on eBay. For this project I don't mind using figures painted by other people because I seek "mass" in these armies.

So it looks like I had better prime more of my HaT Romans so that I have something to paint later in this week.

But wait! There is more. Here is a little preview of things to come: 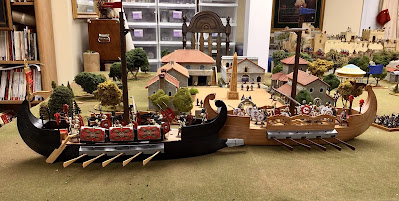 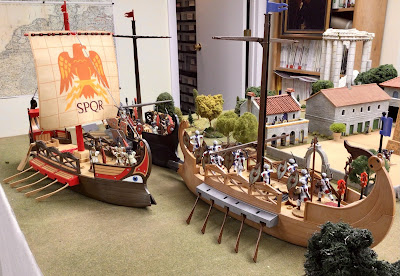 Go ahead, talk amongst yourselves (as Linda Richmand would say) and feel free to leave some comments in the comment section below.