I have acquired eight of the HaT Carthaginian Cavalry figures from another collector and plan to use them "as is" or do a minimal amount of touching up with paint. The figures are from HaT set number 9056 and are in 1/32 scale. 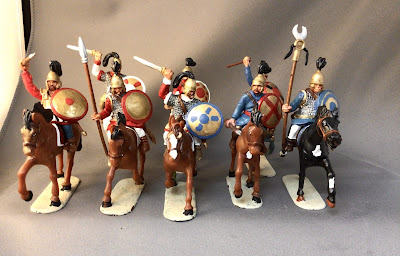 If anyone has any painted or unpainted HaT Carthaginian Cavalry that they would be interested in selling, them please contact me so that we can make arrangements. I need 8 more mounted figures to complete a 16-figure horse unit, 16 being the minimum number of figures that would be "viable" in my proposed rules that I'm currently writing.

I contemplate having a Carthaginian cavalry contingent consisting of 16 heavy Carthaginian horse, 16 Gallic horse and 32 Numidian light cavalry. The latter two cavalry types are readily available from the usual plastic toy soldiers dealers so I should have no problem fielding the majority of my cavalry..... but I sure would like to have a few more of these Carthaginian fellows.