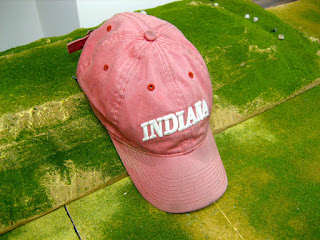 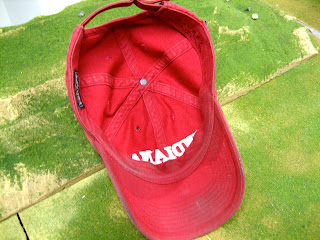 The other day I was wearing my "Indiana" baseball cap while driving my car and I happened to set the cap down on the dashboard. It tumbled onto the floor, of course, the next time that I pulled away from a traffic light. However, this was a good thing because it was then that I noticed the difference in the color of the red on the outside of the cap (faded red, almost pink) and the inside reverse part of the cap, which still retained its original bright red color.

Now if you are anything like me, all manner of things in your daily life somehow, someway have an application to the wargaming hobby. Right?

I immediately began to think about the regiment of British infantry for the AWI that was sitting on my painting table. I wondered how the unit would look if I painted the uniforms a faded red to give it a campaign appearance rather than painting the coats in crimson red, straight from the tailor's bench.

You can see the difference in the two figures in the picture above. The fellow on the left is a member of the 5th Regiment of Foot, Centre Company and he is kitted out in a faded pinkish-red coat with light green facings. His right knee, which you can not see in the picture, has a knee patch on it and his elbows have elbow patches that he used to repair his worn out jacket. For good measure, I gave him a used brown blanket (see the tumpline on his back) rather than the usual medium grey blanket. Finally, I spattered some dust or mud on his overalls near his feet. He certainly looks like he has been on campaign for the whole season.

Now compare our man from the 5th Regiment with his compatriot from the Brigade of Guards. Our Guardsman wears a bright red coat and his blue facings (cuffs, lapels and collar) have yet to fade. He is the epitome of spit and polish, as one might expect from the Guards.

Above is picture of the first dozen of the 5th Regiment that I painted over the weekend. I thought that I would give the officer (far right) a new coat in its original crimson red, given that he would have the personal funds available to keep his uniform up to snuff. The first sergeant (far left front row) also has a crimson coat. The rest of the rank and file wear faded red coats. The picture is not very good, but it gives you a general idea of how things might look once the whole unit is completed.

To provide a little more variety, some of the men will have different color overalls (light brown, tan or darker grey) and I will randomly distribute knee and elbow patches on the figures. The blankets will be painted in a variety of brown, green and grey. The figures with the blanket rolls are easier to paint as the blanket covers up a lot of the lapel areas and give you the added bonus of having more surface area on which to go crazy with patches or patterns to give the regiment an even more hodge-podge appearance.

I will be working on the rest of the regiment this week and hope to have the 5th Regiment finished and based by the end of next weekend. Stay tuned for pictures of the finished product.