I found this nifty looking militia flag on the Revwarlist group today and like it so much that I think that I will paint a new American militia battalion, using Fife & Drum Miniatures of course, and give it this flag.

One of the re-enactor units in Pennsylvania apparently use this flag for their unit. In Pennsylvania, the militia were called "associators". Perhaps the most famous of these regiments was the Philadelphia Associators commanded by John Cadwalader. They gave a good account of themselves in the Trenton-Princeton campaign in early 1777.

The canton has the thirteen red and white stripes found on several flags in the Pennsylvania-Delaware area near Brandywine battlefield. In fact, several similar flags of this style were called Brandywine flags, as they seem to have first appeared at this battle.

The Brandywine flag was a banner carried by Captain Robert Wilson's company of the 7th Pennsylvania Regiment. The company flag received the name after it was used in the Battle of Brandywine, 11 September 1777. The flag is red, with a red and white American flag image in the canton.[1]
Other stories indicate that the flag may have actually flown earlier, at the Battle of Cooch's Bridge in Delaware on 3 September 1777.[2] Captain Wilson may have also brought it to the Battle of Paoli on 21 September and the Battle of Germantown on 4 October.[3] 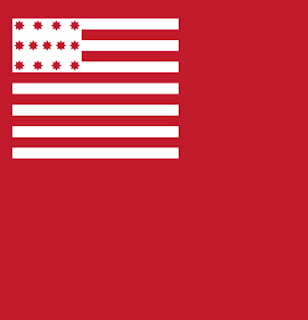 The 7th Pennsylvania Flag may have been one of the first American flags to feature stars and stripes, although it was a militia company's flag, not a flag of Washington's army.[4] The Flag Resolution of 1777 defined the official flag of the United States as having 13 stripes and 13 stars, although the specific pattern of the stars was not specified. Many variations existed. The flag shown in the canton of the Brandywine Flag uses a 4-5-4 star pattern, and was probably patterned after a Hopkinson-style United States flag.
The Brandywine Flag is currently displayed in Philadelphia's Independence National Historical Park,[3] and was featured on a 33¢ postage stamp issued in 2000, as a part of the US Postal Service's Stars and Stripes series. The colors and pattern on the stamp may have been altered for aesthetic purposes.

Perhaps GMB Designs or The Flag Dude will add this flag design to their product list.
Posted by Der Alte Fritz at 1:07 AM