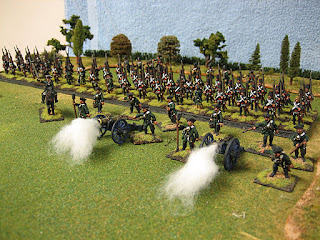 The von Kleist Frei Korps was one of my favorite wargaming units, but it has passed into the service of the Duke of Freiberg awhile back. I still get to see it on the table top from time to time since the Duke and I game together on a regular basis. Over the years I have become less and less enamored with Foundry figures, but I have to say that the von Kleist figures and the Prussian artillery crew (painted in von Kleist green) are pretty darn nice looking figures.
Posted by Der Alte Fritz at 6:58 PM