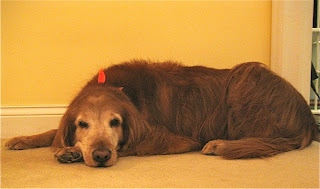 David J. Dog, or as we like to call him, just "Dave"
A month ago we had two hounds in our home, old Katie (age 15) and the younger pup Dave (age 11). As you may recall, we had to put Katie down less than 4 weeks ago. There was some comfort in the fact that we had Dave to keep us company. But Life had other plans for Dave - we discovered that he has bone cancer in his front left leg. So in the span of one month, we face losing both of our beloved hounds.
Dave had developed a limp during the summer and the initial diagnosis was arthritis in his knees. Anti-inflammatories seemed to be working and the limping subsided. Then, about a week before Katie passed away, Dave's limp returned, even more pronounced. Another vet visit and the same diagnosis. However, Dave did not improve. So Anne took him back to the vet one more time this past monday, and new x-rays revealed the presence of tumors in his legs.
We were told that either the leg would have to be amputated, or if the cancer had spread to his torso, then he would have to be put down. On wednesday, a visit to a Vet Oncologist gave us a prognosis of 1 to 3 months if we did nothing, maybe 6 to 9 months if Dave had radiation therapy, and several other "in between" options.
I can't see Dave having a very good life with only three legs, and we don't want to take "heroic measures" to prolong his life. Radiation therapy and chemotherapy might add several months to his life, but at a prohibitive financial cost. So now we are monitoring him, administering pain killers, and sort of figuring out when to put Dave down. The greatest concern is that the bone cancer weakens his leg bone and it could easily fracture if there is too much activity. That would result in putting him down immediately if he breaks his leg.
For now, Dave seems rather happy and cheerful and he is able to walk around the house without too much strain. It seems too early to put him down now. I don't want to wait too long, nor do I want to have it done before it is necessary. We will probably try one round of chemotherapy and see how that affects him. If he could handle it, then we would do this for several more weeks. If the chemo makes him too sick, then that would be the end of that.
We hope that Dave will be with us at least through Christmas and we are gradually entering the 'acceptance' phase of the grief cycle. We expected Katie's demise, but we really did not see this curve ball coming. That is what makes it so shocking and painful. The oncologist said that Dave is in pain, but that Goldens want to please their humans so much that they will hang on longer than most breeds.
As long as Dave is bright eyed and bushy tailed, we will cherish his remaining days. He is such a good fellow. These are sad times, but we are taking great joy from Dave's presence each and every day. Day by day until the time is right. I guess that we will know when that is.
*****
Tomorrow's posting will undoubtedly be more upbeat and less of a downer. We shall persevere. Coincidentally, we had scheduled a visit to a Golden Retreiver breeder this weekend to find a replacement for Katie. The plan for now is to hold off on a new dog until Spring.
Posted by Der Alte Fritz at 8:02 PM