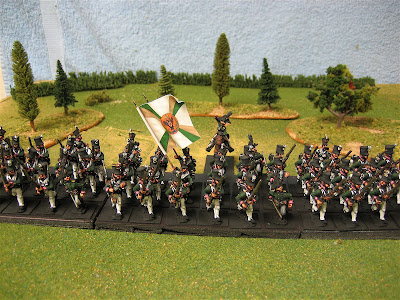 Close up shot of the Smolensk Regiment on temporary stands. Click all pix to enlarge the view.

I did an inventory and sorting of all of the 1805 Russians that I bought from Old Glory over 15 years ago. These are the original Dave Alsop sculpts that were compatible with his limited edition French in bicorns and shakos that are no longer available. The Russians were not going to be released to the public after Dave's untimely passing since the range could not be completed. I prevailed on Russ at Old Glory to cast about 900 of the Russians for me and he agreed to do so. I believe that a couple other people in Omaha, Nebraska also piggybacked on my bulk order.

I was going to build up Russian forces to refight the Battle of Austerlitz on its 200th anniversary in 2005. The battalions would have been at 1:30 or 20 figures per battalion. I had about 40 plus battalions of Elite Miniatures Russians painted over the ensuing years and I probably could have completed the project, had not life, getting married and having a family not interceded. So I didn't do the big battle, Wargame Holiday Centre style, but that was my intent. 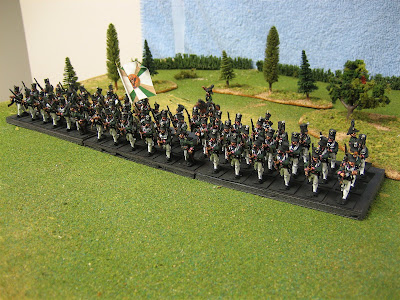 Once I caught the bug to do Napoleonics again at a 1:10 ratio with French and Prussians, it occurred to me that I still had a lot of Russian castings left over, even after having sold the entire painted collection of 28mm figures a couple of years ago. I thought that I would never paint another Napoleonic soldier in my life, but I guess that I was wrong.

It seemed like adding a couple brigades of Russians, circa 1805-07, would dovetail nicely with my French in bicorns and my 1806 Prussians. Afterall, the remnants of the Prussian army in East Prussia fought with the Russians in 1806 and 1807. Or, I could do some of the battles in the 1805 campaign and maybe add a few Austrians too. See how a little project can grow by leaps and bounds? 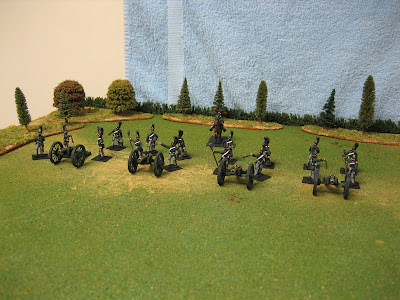 So I did the Russian inventory and found that I had enough figures to paint 14 battalions of 60 figures, or 840 figures in total, from my existing supply of lead. I had previously painted the Pavlov Grenadiers and the Smolensk Musketeers in shakos, so two battalions were done, and Apsheron Musketeers in bicorns were half way done. So I had a good start on a Russian brigade. The inventory indicates that I will eventually have:

All of the above will be Alsop Old Glory figures. I also use Elite command figures (officers, drummers and standard bearers) since Alsop only made one NCO figure (the fellow who is pointing his arm to lead the way).

To that I will add two battalions of jagers using Elite Miniatures. Because Old Glory did not make the artillery or cavalry, I decided to use the Elite range of figures for everything else. The pictures of the horse artillery are from the Elite range. 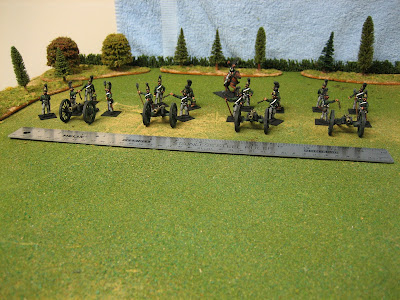 Elite Russian horse artillery battery has a frontage of 15 inches. 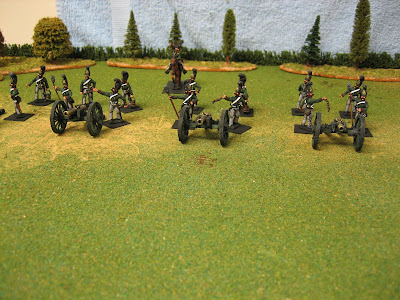 A closer view of the Elite gun crews and cannon.

The cavalry contingent will eventually include a regiment of uhlans (40-48 figures), some hussars (30-36 figures), dragoons (40 figures) and cuirassiers (48 figures) plus an assortment of Cossacks that I will recruit from my Seven Years War Russian army.
As you can see, I have a lot of painting work ahead of me and I probably will not start painting the Russians until sometime in 2010. Then, assuming a pace of 60 figures a month, we are looking at a couple of years of painting work to finish the project. That is not to say that there will not be periods where my painting production is not faster than 60 figures per month, but that is a sufficient amount to assume for planning purposes. Anything faster than that would lead to severe painter's burnout.

In the short term, I may add a battalion of Russians here or there so that I can build out the first brigade of infantry sooner rather than later. Since I only need 4 battalions per brigade, I am already half way there. And those uhlans, hmmm, Fritz likes uhlans and has been wanting to paint them for a long time. I can hardly wait. But first, I have to finish some more of the French and the Prussians.
Posted by Der Alte Fritz at 10:17 PM