Battle of Schaumburg - Part I 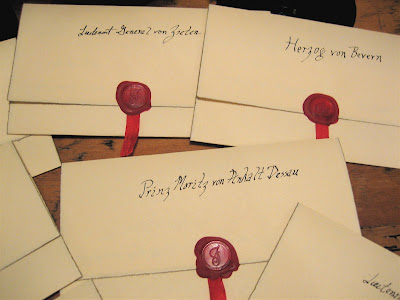 On Saturday October 10, 1759 a great battle was fought between the Germanian army of Erbprinz Friedrich and the Gallo-Saxon army of Lt. General Chevert near the village of Schaumburg, located somewhere within the realm of the Saxon Duchies. Some two hundred and fifty years later, sixteen wargamers recreated this little known battle in Woodstock, Illinois.

The scenario was loosely based on the battle of Austerlitz, with the Prussians playing the role of Napoleon's French army and the French, Saxons and a few Austrians playing the role of the Russians and the Austrians. The names of all of the towns and terrain features were changed in order to disguise the scenario, but as you look through the game photos, I am sure that you will be able to spot the similarities.

Due to the large number of photos that I took, I plan to divide the after action report into two or three parts this week. So without further ado, let us see what happened in the fierce fighting to control the village of Tagewerben (Telnitz). 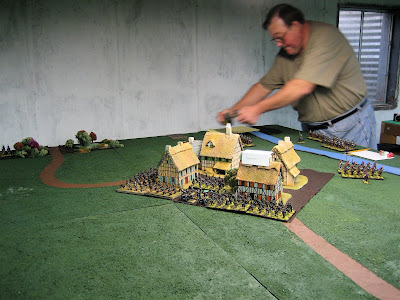 The Prussian Colonel von Kliest makes a few final adjustments to his deployment of his freikorps in the town of Tagewerben (Telnitz). The blue water is the Rohrbach-wasser (Goldbach stream).

The Prussians placed a brigade of freikorps troops in the forward position of Tagewerben to act as a trip wire for the expected French attack on the right flank of the Prussian army. We set up a footprint for each village using brown felt squares, then placing several buildings atop of the felt. Any unit touching the felt was considered to be "in the town" and thus gained the benefit of hard cover. Musketry from the town was given a minus one modifier to reflect the dispersion of the troops about the town.

The French players were ordered to attack Tagewerben with their advance guard brigade of Fischer's Legion. After taking the town, they were to cross the Rorbach-wasser and head for the town of Rheinhausen at the very edge of the Prussian back table. As this road and town were astride the Prussian supply lines, any French unit that left the table would result in "TWO" Prussian units being required to leave the table to pursue and defend the lines of communication. This placed a great deal of importance on the Prussian right flank. 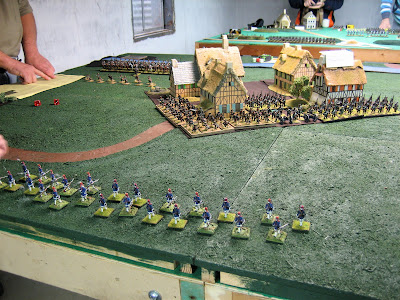 French light troops advance warily upon Tagewerben, ahead of the vanguard of Fischer's Legion of light infantry and cavalry. Rheinhausen can be seen in the far right background. 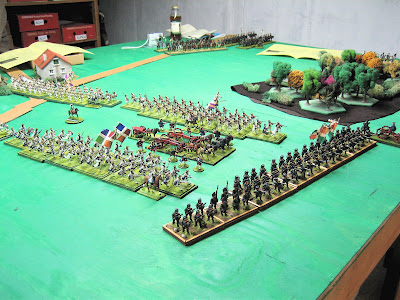 Fischer's Chasseurs a Pied (left in green) screen the first column commanded by Lt. General d'Armentaires as they converge on Tagewerben. 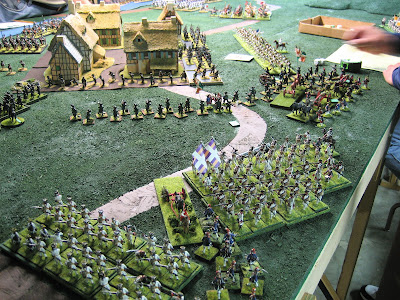 Fierce fighting soon develops in front of and around Tagewerben as the French attempt to envelope the town from several sides. Compare this to the earlier picture of just the light troops advancing before the town.

I allowed von Kliest to conceal of company of freikorps infantry in one of the woods that were in front of the town. I replaced the Sachsen Ponds with light woods to help disguise the scenario a little bit. The ensuing ambuscade seemed to disorient the Brigadier Fischer for a turn or two, as he wasn't expecting to meet any resistance before he reached the town. This seemed to slow down the French attack for a turn or two until they regained their confidence. Of course, four more battalions of French regulars and some 8 pound cannons will do wonders for one's morale.

Von Kliest posted the rest of his freikorps in Tagewerben, supported by a battery of light 6-pounders and a battalion of elite Prussian jagers. These rifle armed troops can hit targets at 40-inches in our rules and since they had earned the "elite" rating through their exploits in at least two previous battles, their +2 for being elite offset the -2 for the 40" distance and thus could pick off the French at long distance with little fear of losing any of their own men. Von Kliest also had a battalion of grenadiers that he posted on the other side of the Rohrbach-wasser. Any troops crossing the stream would become disordered for a turn, so von Kliest counted on being able attack/melee any French that dared to cross the stream while they were still disordered. A big advantage in a melee. Since Brigadier Fischer wrote the BAR rules (Bill Protz) he did not seem too interested in testing the mettle of the Prussian grenadiers. 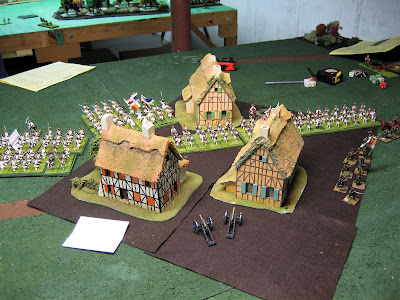 Tagewerben finally falls to the French, who now occuppied the town.

While the fighting was going on outside the town, there was a lively little light cavalry melee going on next to the village, between the Saxon Lanciers de Saxe on the French side, and some von Kliest Frei-hussaren and regular Prussian hussars. 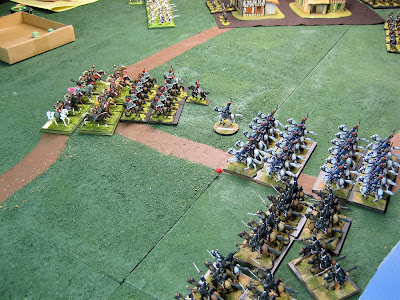 The Saxon uhlans appear to have the upper hand during the first round of melee, but the Prussians had more reserves, including two squadrons of the blue-coated HR2 von Zieten hussars and the black-clad HR5 von Ruesch Black Hussars. 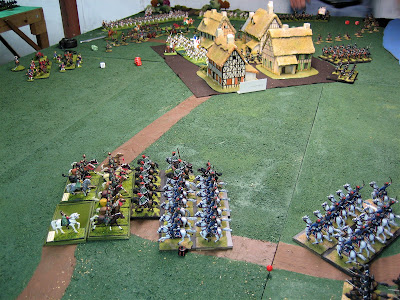 General von Zieten lends the support of a squadron of his Prussian hussar brigade. As you can see, the Saxon lancers are now outnumbered and their defeat is enevitable. A second squadron of blue hussars are also available if needed, while the Black Hussars watch the handiwork of their comrades. 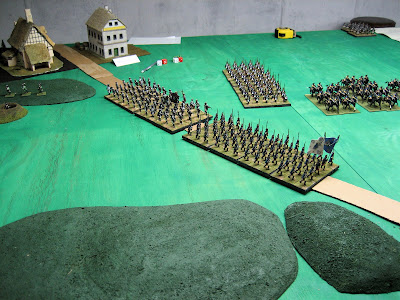 Speaking of von Zieten, his reserve infantry brigade, begins to arrive in the nick of time via the village of Rheinhausen. Von Zieten is, of course, actually representing Davout division at Austerlitz. 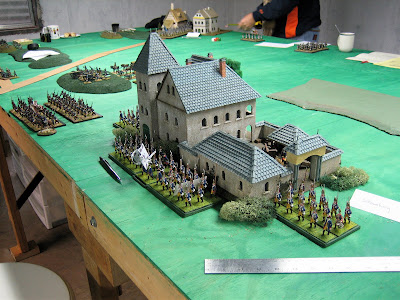 Schloss Schaumburg (Solonitz Castle) is well defended by a brigade of Prussian infantry. The French never made it this far during the game. 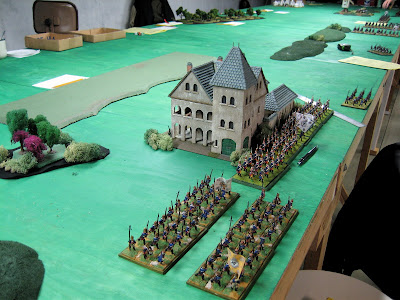 Another view of Schloss Schaumburg, which was built by the talented Herb Gundt of H.G. Walls fame. I commissioned this building some 15 years ago or so with the intent to use it in a 200th anniversary game for Austerlitz with Napoleonic troops. Alas, that game was never played, but I still had my Sokolnitz Castle model and I wanted to use it in the game.

So the French captured Tagewerben (Telnitz) after a fierce struggle, but they elected to stop there they made no attempt to cross the Rohrbach-wasser and attack either Rheinhausen or Schloss Schaumburg. In retrospect, the extra Prussian brigade was an impediment to the game and I would not use it a refight, as it made the Prussians too strong in this sector. I had hoped to see the French cross the stream and attempt to capture the castle.

If I were to run this game again, either as a SYW game or the real deal Napoleonic version, then I would only permit one battalion to occuppy Telnitz and have the rest of the brigade that fought there in our game appear within three turns as the "Davout" stand in. This would give the attackers a significant advantage, while there would be fewer defenders in the village. Adding a single bridge across the Goldbach might also help the attackers.

A Teaser For Part II's Report

On Monday or Tuesday I will post pictures and a report covering the fighting atop the Schmiedeberg hill (Pratzen Heights). Below is a picture of some of the action. 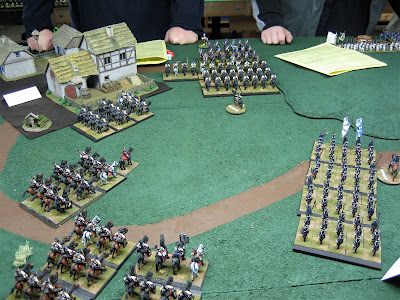 Prussian guard cavalry (CR10 Gensdarmes and CR13 Garde du Corps) surge through a gap in the French lines, defended only by the Regt Royal French cavalry. Prussian infantry to the right ascend the heights to fight the French.

Stay tuned and check in for more pictures tomorrow. As always, click on any of the pictures to enlarge the view.
Posted by Der Alte Fritz at 10:39 PM