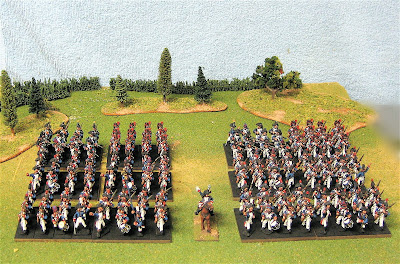 I finished the last four voltigeurs, this evening, that I needed to complete my second full regiment of French line infantry for my 1805-1807 project at a 1:10 ratio. As shown above, these are Elite Miniatures figures with all of the soldiers in the "at the ready" pose. The two battalions of the previously-painted 12e Regiment de Ligne are all in the "advancing" pose. Thus, when I start removing single casualties during a game, I will remember which regiment the figures belong to by way of their pose. These two regiments complete Petit's Brigade in Gaudin's 3rd Division of Davout's III Corps.

Note that I have not gotten around to basing the figures yet. I will terrain the individual bases with spackle compound and gravel and flock to finish them off. 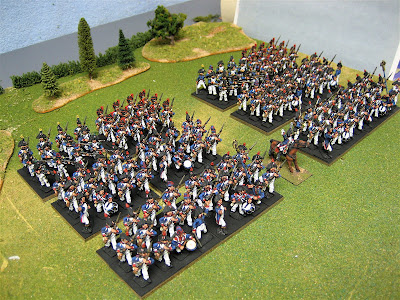 Another view of the 21e Regiment de Ligne. Click all pictures to enlarge the view.

For the month of October, I ended up with 89 Olley Painting Points - all of them infantry figures this month. That included 72 French line, 2 eagle bearers, 1 "old Elite" carabinier in the Napoleonic genre. In the SYW, I painted 8 Stadden Prussian grenadiers for the Reisengarde regiment and 6 Stadden AWI artillery crew that were painted as Prussian artillerist.

We have our annual SYW light troops game on December 4th or 5th and so I suppose that I should work on adding more dismounted hussars and freikorps dragoons, but I would much rather work on the 1806 project.
m
Posted by Der Alte Fritz at 6:23 PM